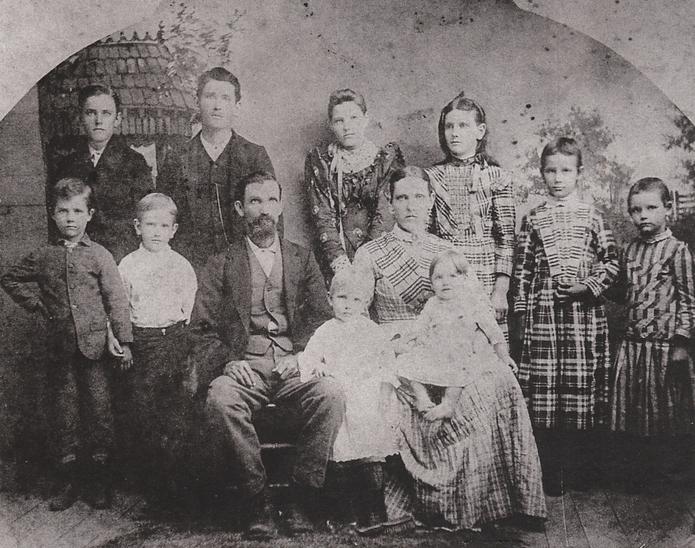 A year after her husband’s death, Samantha married Julius Simpson Taft. He had been previously married—at least once—and was the father of Libbie, Jay Wellington, Lydia Director, and Ettie Florence Taft. [1] His first wife, Martha Green, had brought two sons, David Meredith Green and Frank Green, to that marriage. Samantha entered the union with her six children, soon losing two of them.

[1]       Some of these names are debatable or unsourced. See next page, “Taft-Henderson Photo Mystery,” for more information.

Baby Roy was 12 months old when his mother died on August 2, 1896. Ruby was almost 9, Della, 6, and Alta, 4. At the time of her death, Samantha was 41, would have been 42 had she lived until her August 27 birthday. She is buried at Bethesda beside her first husband. Julius is buried in the Sabine Cemetery in Lindale near the graves of other members of the Taft family.

Three of the four surviving Henderson children—John Lee, Etta, and Jennie—were already married when their mother died. Jennie had married William Brinkley York at the age of 15 on January 4, 1894. Etta, at 19, had married Charles Morton Hudson on September 5, 1895, and Lee married Lillie Eva Perkins on November 27, 1895. He was 20. The youngest Henderson child, Franklin, was 12 when his mother died.

Some time after Samantha’s death, Julius Taft moved to Cherokee County, Oklahoma, taking his four children with him. Franklin Henderson did not want to leave his home in Lindale, and as a young teenager moved into the home of his older brother Lee and his bride. [2] Eva and Lee had an infant daughter, Jessie Lee Henderson, born September 27, 1896, eight weeks following the death of her grandmother. Eva, a mother at 18, now had two children.

This was not the final chapter in the Henderson-Taft saga. Letters written by Ruby from Oklahoma to her half siblings in Texas revealed a family situation less than ideal. At some point (the dates at this writing in 1995 unknown) Ruby wrote asking Lee to come get her and her sisters and brother.

Stories passed down in the family, rather than records, pick up the story. John Lee took the train to Oklahoma and returned to Lindale with his four half siblings, who were to make their homes with him, Etta, and Jennie. My mother, Jessie Lee Henderson Anderson, remembered that “we were really all one big family.” She, her uncle Franklin, and her own siblings—Raymond, Charlie, DeWitt, Mildred, and Edgar (who died as a baby)—also counted Ruby, Della, Alta, and Roy as family members. She was especially close to Roy, who was nearest her own age, and always considered him another brother. Ruby was her idol and mentor; my mother went into training to become a nurse because Ruby had graduated from nursing school.

Lillie Eva Perkins Henderson, at age 33, had become the mother and/or mother figure for 11 children—the six born to her, plus her husband’s brother and his four half siblings.

[2]     The 1900 Census shows Julius and the Taft kids (Liddie, Jay, Ruby, Della, Alta, and Roy) living in Lindale, Texas. Meanwhile, Franklin, 16, lived with his married brother John Lee Henderson. The census has them just four households away from each other.
But by the 1910 Census, Ruby, Della, Alta, and Roy were living with John Lee and Eva. Julius was likely also living in Lindale in 1910—alone. There is a Taft of the right age and birthplace, but the census taker forgot to fill in the first name.
By the 1920 Census, Julius was living with daughter Libbie’s family, and the other kids were married and/or scattered. The date of the Tafts’ move to Oklahoma is unknown.