Before 1925 women who chose to become nurses were usually considered to be morally corrupt because the Victorian concept of a woman’s place allowed nothing beyond a career as wife/mother/caretaker of humanity within the confines of the home. Those who chose any career beyond these realms were suspect. Further, nursing required knowledge of the physiology of males as well as females and “everybody” knew that women who cared for the intimate body parts of men had to have ulterior motives.

Another, and probably the most significant reason for women to choose nursing is that, through the years, it has led to financial independence. (1) It is a career that allows a woman to make her own livelihood. Though, until recently, nurses have been undervalued and underpaid, they have always been needed and usually able to find a job. (2) It is a career that allows for flexibility. Even though licensing is required in every state, women can fairly easily transfer their nursing credentials. (3) It is a career that welcomes the return of women who have taken time out to rear families or to attend other personal needs. (4) It is a career that very often allows manageable hours. Good nurses can often negotiate job timing to accommodate their other responsibilities. (5) It is a career with limitless possibilities for a woman to specialize. With study and experience, she can control her own career goals from bedside nursing to administration to teaching with virtually limitless choices in each of these areas. It sanctions those who want to lead as well as those who desire only to serve.

In the “olden” days—again those times before 1925—women who insisted on having careers were allowed extremely limited choices. Above all else, they must be wives and mothers. If they insisted on careers outside this realm, they could be—with limited societal approval—teachers or nurses.

The Henderson women almost always chose nursing rather than teaching. This, quite likely, was more a career of necessity rather than the career of first choice. To teach, one had to have a certificate, and to gain a certificate, one had to have some college training, limited though it was. Women who taught needed tuition, fees, and living expenses for at least one year of college in order to the get hired. For many women, money for this was nonexistent. They often did not have the support of parents, especially fathers, who were content to keep their daughters at home. Financial sacrifices that were made to send sons to college were withheld from daughters.

Nursing, on the other hand, was a career where a young woman could earn as she learned. Though stipends were minimal, restrictions profuse, and expectations extraordinary, a woman could earn a nursing certificate without the financial assistance of her family—and many of the Henderson women did just that.

They are as diverse as they are exemplary, these women of the Henderson family who have been nurses. Most of their individual stories are lost to us, their experiences buried with them. Here are the fragmented tidbits, both real and anecdotal, that survive some of them. Here, too, are stories of some who have chosen the noble career of nursing.

Whether born into the family, married into it, arrived in it by step-family relationship or adopted into it, the Henderson women have always been nurturers. For many of them this natural affinity to take care of others has found its outlet in careers as nurses. In every generation, since the first to be born in the State of Texas, women have chosen nursing as a profession. This giftedness toward nursing as a career has found root in individuals of the Henderson family wherever they have gone.

This inclination to caretake and the outward results of it has led many of the women to become registered nurses. None has chosen this route of looking after others as a shallow or vapid response to reality. All of them have known, or have learned, that they must be tough as well as tender, creative as well as systematic, both professional and proficient, both facile and flexible. Their chief handicap has been in the prevailing belief in this country that they are handmaidens to physicians, that their credentials are secondary to those who have earned the M.D. title, and that they are, in brief, servants of surgeons and other practicing doctors. Their unique and independent roles in healing and caring have never been sufficiently honored.

Ruby Anne Taft, right, exults with her classmates, identified only as Cardwell, left, and Tallie, center, upon their graduation from nursing school. As far as current records reveal, Ruby Anne is the first person in the Henderson family to become a registered nurse. 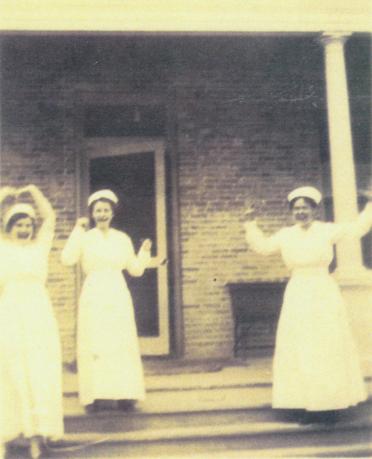