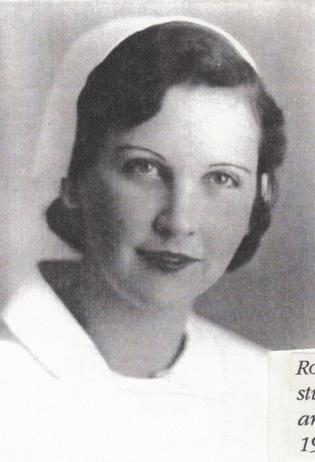 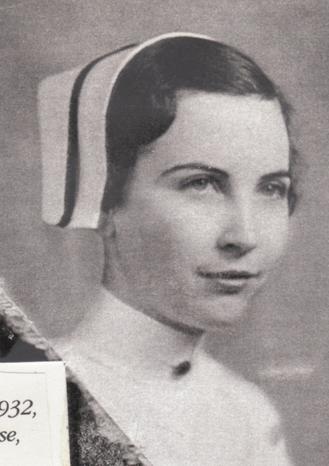 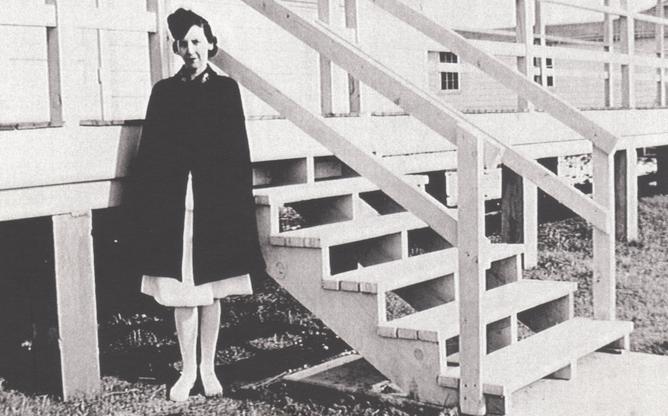 Roserma Hensley Arnold in her army nurse uniform in 1942. She was in service for two years during World War II.

Up in Oklahoma, with no knowledge that other women in her family formed a long line of nursing professionals, another young woman considered her options and chose to become a nurse.

Her name was Roserma Hensley. And this is her story in her words:

I grew up and attended grade school in a rural two-room school house in a village called Mexican Springs about five miles from Wynnewood, Oklahoma. When I finished the eighth grade, I transferred to Wynnewood and lived with Rose [her aunt] and her husband spending the school term with them and weekends and summers at home with my family. I attended Wynnewood High School. This was between 1929 and 1932; my high school graduation date—May 1932—was in the midst of the Great Depression.

We never knew there was a depression because we always had plenty to eat; we grew everything. Mother canned and preserved food for the winter and we saved potatoes by sifting lime on them and putting a layer of hay over the top. This way they kept for a long time. We butchered our own meat. We were used to living sparsely. We sewed our own clothes and we patched and darned, re-soled our shoes, handed down and made over clothes.

There was no money.

Every Sunday evening when I returned to town to my aunt’s house, Mother sent a lot of farm produce, far more than enough to provide my meals. They also paid Rose $5 a month for my care. My brother was usually responsible for my transportation to and from my home into town.

Townspeople often snubbed country folk so I did not always feel welcome in Wynnewood High. Aunt Rose knew a lot of people so she pushed them and buffered me over some rough spots. But it was not easy. I had to walk about a mile to school. I didn’t mind that at all except on cold, cold days or when it was raining. The north wind would whip right through me. I couldn’t understand how parents with room in their cars could pass right by me on their drive to school with their children. Today when I return to Wynnewood I have to fight to keep from feeling resentment toward some of the people who wouldn’t help me fight the cold, north wind.

Mother very much wanted me to learn how to play the organ and she gave me piano lessons. I do not have music in my blood, so the music lessons didn’t take very well. I did learn enough to play for Sunday School and some other functions in the rural school house. Mother also thought if possible she would send me to teacher’s college and I could work for my room and board.

I did not know anybody in the family who had become a nurse, but a girl in Wynnewood who had finished high school the year before I did entered nurses’ school and came home with glowing reports of how much she liked it and how she looked forward to finishing and working for money! I also knew vaguely two other girls in nursing school. Rose encouraged me to take this route.

Mother and I talked it over. I told her since I would be working for my room and board, I would rather go for nursing. She agreed that it was okay with her. My father said very little if anything. I don’t recall if my brother had a reaction.
I applied to Oklahoma General Hospital in Oklahoma City and was accepted. I entered nurses’ training in the fall of 1932 after graduating from high school. I was 18 years old.

The school was about an 80-bed hospital (I have forgotten the exact number.) It was privately owned. I don’t know what I expected, but I fell deeply in love with nursing. It was my first love.

I graduated in 1935 and began doing private-duty nursing for $7.00 for a 20-hour day. I took the state boards and received my R.N. certificate and have never had any trouble getting work. Institutional work paid $60.00 a month with one half day a week off, launder of uniforms and meals at the hospital provided. After about a year of private duty, I decided to do institutional work. I did not like being tied down to one patient even though it meant more money.
The opening for night supervisor where I worked when I graduated was then offered to me. I took the job and did that until there was a daytime opening, that of O.B. supervisor, to which I transferred. I relieved in surgery a lot; it was my very favorite.

After five years of that, I joined the Army and that is another story which I will tell separately. I was in the service for about two years. Then I married Harry Arnold Sr., a civilian and civil service employee and foreman of the Plumbing Shop at Fort Sill, Oklahoma.

After marriage, I did some volunteer teaching of Home Nursing at Fort Sill. I helped the Public Health Department of Oklahoma get all of the children from Lawton and Fort Sill inoculated for polio immediately after the vaccine came out.
In 1967 I became American Red Cross nursing chairman of Comanche County and continued in that job as chairman of home nursing until 1973. I also directed programs for teaching Mother and Baby Care, Blue Teens and Baby Sitting.
During this time the idea of preventive health care was surfacing. The City of Lawton decided that their people, beginning with their police department, could benefit from a course in preventive care. They asked the American Red Cross for ideas on putting such a program into place and I, with help, put together a pilot program and did several classes for the city. That is another totally different tale which I will relate in another space.

Then, as a Red Cross volunteer, I became acquainted with the head nurse and administrator of Lawton’s hospital. In 1973, I decided I would go to their Comanche County Memorial Hospital and apply for a job to work part time.
I went to the hospital one morning and asked if there were a position open. I reported for work the next morning. I worked there for five and a half years and enjoyed it so much. But, as time went by, the work and pressure became more and more stressful and hectic. I asked myself, “why are you doing this?” I had no answer that made sense, so I resigned.

Years take their toll on a person. I enjoyed my career. I liked being a nurse. And then, I got into genealogy and aerobics three times a week and was interested in so many other things in life. For a time I did volunteer nursing in the hospital and for friends who asked me, but that took its toll. Today I am enjoying a totally different time of living.