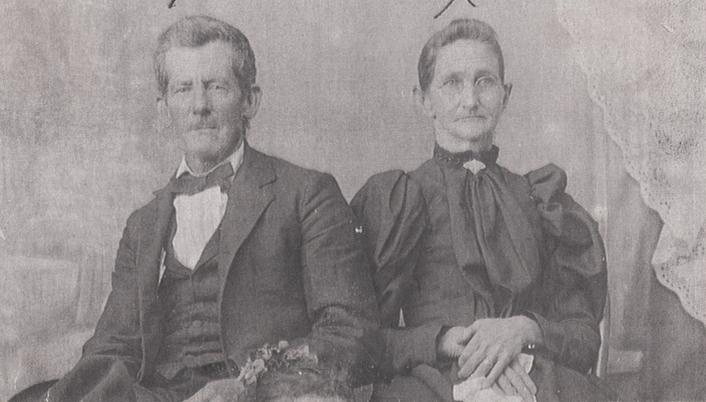 Mary had made her claim in the State of Alabama in Perry County before Justice of the Peace G. W. Blackburn on December 29, 1862. It was cosigned by Wm. L. Henderson, her father. Mary waited almost four years for the settlement of her claim, which finally came on September 15, 1886.

The Henderson household during those years had to have been hectic because Mary Amanda was back with her parents and her three small children, two of whom were older than her baby brother. Her sister Martha Elizabeth, who had married in December 1861 and whose husband was also in service, was also back at home. From the dates of best records available, when John McGahey died shortly before Christmas in 1862, William Lee and Eleanor Selina’s family had increased to 14. Six of them—Mary and John’s three and Eleanor and William’s three youngest—were all under 10.

Uriah was no stranger to the Henderson family. He was, in fact, already a member of the family, having been previously married to Margaret Henderson, the daughter of John Elam and Abigail Bradley Henderson. Margaret, who had married Uriah on August 19, 1863, died four years after she was married, in August of 1867, following the birth of her second daughter, Luxie Leatus. She left another daughter, 1-year-old Alfa Viola. The little children were 3 and 4 when Mary Amanda became their stepmother.

In 1879 when the families all moved to Texas, Uriah’s daughters Viola and Luxie were 13 and 12. Mary’s McGahey children were grown, 18 and 22, both still single. Mary had given birth to three more children—William Washington Dobbins on April 16, 1872; Irma Teressa on January 27, 1874, and Essie Lorilla, on April 14, 1876. The children, all born in Marion, Alabama, were 7, 5, and 3 when they moved with their parents and half siblings to Texas.
In Smith County, Mary and Uriah added to the family Sallie Jane, born September 21, 1881.

The Dobbins family left Lindale in 1891 and moved to Indian Territory, which later became the state of Oklahoma. On November 4 of that year, Rosa Lee McGahey Dobbins was born. [2]

The Dobbins family rented a farm near Wynnewood, Indian Territory. In 1908 they bought property in Chickasaw Nation, Indian Territory. Five years after they left Lindale, Willie (William Washington) died on August 3, 1896, from typhoid fever. He was 24 years old and his passing seemed to be the one tragedy that Mary Amanda never overcame. Death had taken two of her three sons and she had left the third (James Milton McGahey) in Texas. Her two stepdaughters were married, but all four daughters—Margaret Selina,[3] Irma Teressa, Essie Lorilla and Sallie Jane were all still at home. Rosa Lee was 4 years old.

[1]       Spellings of “Kizziah” vary in records. It was more likely spelled Keziah (most popular spelling), Kezia, or Kesiah, based on their popularity. The two censuses she is listed on spell it “Kesiah” and “Kasiah.”

[2]       Rosa Lee was born to Margaret Selina McGahey, but was raised in the Dobbins household. After Margaret Selina’s death in 1902, it seems Rosa was raised as another Dobbins daughter. Her last name was McGahey on the 1900 census and she was listed as “granddaughter” to Uriah and Mary Amanda, but by the 1910 census, she is listed as Dobbins and “daughter” to Uriah and Mary Amanda.

Mary Amanda Henderson, the firstborn of William Lee and Eleanor Ann Selina Shelby Henderson’s children, was a May Day gift. She arrived on May 1, 1840. Her birth was an occasion for rejoicing. Her parents, who got married on April 25, 1838, had been married for two years at the time of her birth. Her father was 32 and her mother 22.

The baby was welcomed into a large and loving extended family in Mecklenburg County, North Carolina. Hopewell Presbyterian Church, established in 1762, in which the family worshipped, was already three-quarters of a century old.
Mary never remembered being an only child, for the children came quickly, one after the other, following her birth. When she was 22 months old, on March 8, 1842, the Hendersons welcomed a second child, another daughter. They named her Martha Elizabeth. Mary was 5 and a half, Martha Elizabeth 2 years and 4 months when a third daughter was born on July 18, 1845. She was named Margaret Isabelle. Not quite two years after Margaret came their first son, Joseph Asmon, on March 25, 1847.

William and Eleanor now had a houseful of little children. Mary was 9 and a half when Harriet Caroline was born on November 10, 1850, and 11 and a half when another sister, Sarah Jane, arrived on January 12, 1853.

William Lee and Eleanor’s first five children were all North Carolinians, born in Mecklenburg County. Then, at some time in the next 26 months, between November 1850 and January 1853, they moved to Perry County, Alabama, and settled in Perry County just south of the Bibb County line near today’s village of Heiberger. The last four of their nine children—Sarah Jane on January 12, 1853; John Madison on July 10, 1855; William Daniel on January 21, 1858, and Franklin Smith on March 8, 1860—were all born in Alabama.

Before the birth of Mary Amanda’s two baby brothers, she got married. She was 15 when she wed John F. McGahey. He was 28. Since no records of his birthdate have yet surfaced, it is not certain exactly when he was born, but his military records reveal that he was 34 in May of 1862. The McGahey-Henderson nuptials were performed in Perry County on March 26, 1856, by Probate Judge James F. Bailey (Marriage Records, Book 1851–1863, #393, Perry County, Marion, AL)
Rumors of discord between the North and the South were already reverberating on that 1856 March day when Mary and John exchanged wedding vows, but open conflict did not begin until early 1862.

By the time John enlisted in the army of the Confederate States of America, he and Mary were parents of three children. Margaret Selina McGahey was born on March 10, 1857; William Kelsey McGahey on February 25, 1859, and James Milton McGahey on September 14, 1861.

The baby was six months old when John joined Company E, 41st regiment of the Alabama infantry on March 28, 1862. Alabama had been the fourth state to secede from the Union on January 11, 1861, only 21 days after South Carolina was the first to leave the Union on December 20, 1860.

Civil War records reveal that John, who had enlisted for three years, was sick most of the nine months he spent in service. The company muster roll of March 28–June 30 shows him present, but by the next report, June 30–July 31 (1862), he is “absent at hospital in Murfreesesboro [sic], Tennessee.” He died there on December 12, 1862. The records do not list cause of death. The young widow was awarded $85.22, figured at the rate of $11 per month for five months and twelve days for the death of her husband. The complete records are: