Below: 1) Is this Libbie Taft? Or could it be the mysterious Lydia "Liddie"?   2) I believe this is Libbie in the picnic photo (abt. 1904), though she was not identified. I think she is a good match for the girl in the first pic.

Below, some later photos of the Taft girls to compare. The photos from "about 1904" are from a picnic attended by the Hendersons, Tafts, and friends in 1903 or 1904. Click to enlarge.

Same photo as above, but you can click thumbnail to enlarge:

[3] I do not find any record of Ettie Florence. Perhaps she died young?

The photo of the Henderson-Taft family is a bit of a puzzle. If you can help, please contact me.

The caption in the Henderson Book lists the kids as follows, with a date of 1896. I figured the kids’ ages based on an 1896 date, and it doesn’t work.

1) Many of the kids look much younger than they would have been in 1896, for example, Jay and Franklin (bottom left) do not look 13.

2) John Lee, Etta, and Jennie Henderson were married by 1896, and probably would not have participated in such a family photo, or would have included their spouses. Plus, they look much younger here than in their wedding photos.

3) There are 2 people left out of this photo who would have been living at home in 1896—Libbie and Liddie Taft.

4) I have 2 other photos of Ruby Taft as a teen and adult, and she looks nothing like this girl. She looks more like the girl labeled as “Della” or “Alta.”

The names are correct except for the youngest 4 girls, all Tafts. We can safely say the baby is not Roy. Instead, the options are:

Libbie was close to the family as an adult, which is why I think this is her in the 1904 photo. But Lydia/Liddie seems to disappear from the record after the 1900 census. I have not been able to find a married name, a death date, nothing. The only records I have that Lydia/Liddie existed are the Henderson book (one mention) and the 1900 census. 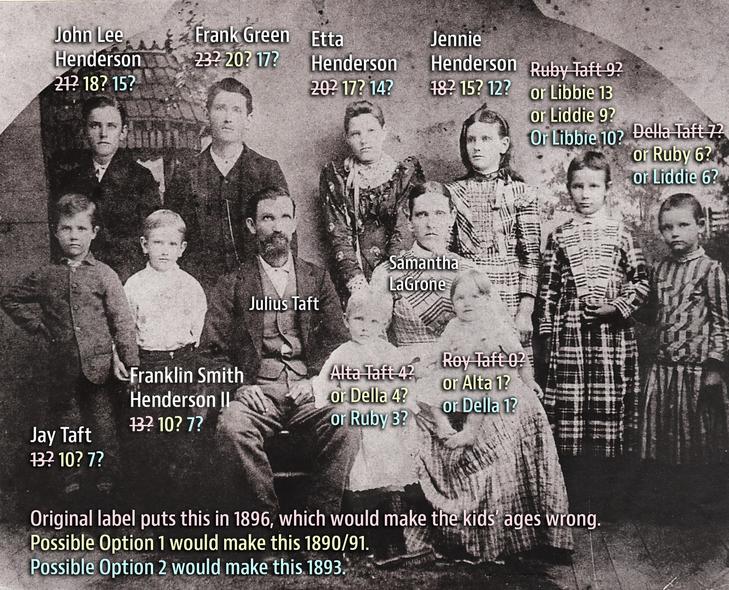