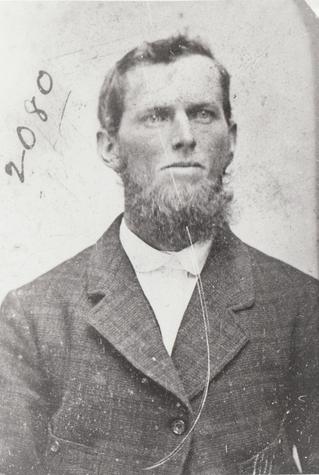 Few details are available about the Hendersons in North Carolina, though there is a rich history of Hopewell Presbyterian Church in Huntersville where they worshipped. The history of Mecklenburg County includes hundreds of illustrious names. In addition to the Hendersons, there are numerous Samples, Shelbys, Alexanders, and many more who are all related.

Sometime in the 26 months between November 1850 and January 1853 the William Lee Henderson family moved from North Carolina to Alabama. Census records show that their fifth child, Harriet Caroline, was born in Mecklenburg County on November 10, 1850 and their sixth child, Sarah Jane in Perry County, Alabama, on January 12, 1853.

This means that Joe could not have been more than 5 years old when he became an Alabamian.

All the Henderson children were given beautiful names, mentioned above, but all were known by nicknames so ingrained in their identity that sometimes not even their own children knew their birthnames. They were called Mary, Matt, Belle, Joe, Hattie, Sallie, John, Will, and Smith. More than one future family member would bear the shortened name of his or her grandparent.

The young couple established their home in Perry County near the family, and their first child, Effie Aletta, was born there on March 31, 1873. Sometime between the spring of 1873 and the spring of 1875, Joseph and Samantha Henderson moved with their daughter from Perry County, Alabama, to Smith County, Texas. These dates are confirmed by the birth of their second child John Lee Henderson II on April 10, 1875, in Texas.

There is some confusion over the birthname of this second baby. On one census record and in at least one Bible his name is given as John LeRoy, but family stories are that he was given the name of his father’s grandfather John Lee. In any event, he was known all of his life as Lee Henderson, his name appearing as such on all legal documents and he is buried as J. Lee Henderson in Bethesda Cemetery.

In Texas, Joe and Samantha joined family members who had preceded them, including the Shelbys and the LaGrones. Joe was doubly related to James Madison and Amanda Ann Henderson Shelby, who had moved to Smith County in 1869 and settled near Tyler. James Madison was his mother’s brother and Ann Amanda was his father’s sister.

Some of Samantha’s LaGrone family had also become Texans. Among them were her grand uncle and grand aunt, John William Adam LaGrone Jr. and Christine Clemente Dominec LaGrone, who had settled at Deadwood.

Joseph Asmon and his uncle, James M. Shelby, selected the Lindale site on which the family settled. Doubtless, he and Samantha were already living in Lindale and he had made at least one crop there because John Madison Henderson wrote in his journal on December 16, 1879, the day the wagon train reached Lindale, “...helped Brother pick cotton.”

By the time his parents and other family members arrived in Lindale, Joe and Samantha had increased their family to five. Etta had joined the family on August 26, 1876, and Jennie on July 21, 1878. Eight months after Joe’s parents and all eight of his brothers and sisters were settled in Lindale, Samantha gave birth to another little boy on August 25, 1880. They named him Archie. Three years later, on December 26, 1883, Franklin Smith Henderson II arrived to complete the family.

Joseph and his father were the first elders of the Lindale Presbyterian Church, the name of which was changed to Bethesda Presbyterian shortly after its founding. He was 32 years old when he was ordained as an elder.

Joseph was a farmer and a wood craftsman. Like many of the Henderson men, he was an artist in designing and crafting furniture and accessories from wood that grew on the family land. Charlene Hudson Kraemer, a great-granddaughter of Joe’s through Etta Henderson Hudson, owns a small table that he crafted. It is in mint condition, still sturdy more than a hundred years after he made it.

Joe was also a fisherman and hunter, providing fish and meat for the family larder. In North Carolina the Hendersons had fished the Catawba River; in Alabama, they fished the Cahaba, and in East Texas they fished the Sabine. In those days before refrigeration, meat and fish had to be consumed shortly after it was processed to keep it from spoiling. Often families, neighbors, and friends took turns slaughtering their animals and sharing the fresh meat with everybody. Families also grew all their vegetables and fruits. In the spring and early summer, while the males in the family tilled the crops, the women were busy from daylight until dark gathering and preserving the produce. In addition to canning—tomatoes, beans, peas, okra, squash, and other vegetables; and some fruits, chiefly peaches and pears—they turned cucumbers into pickles, and berries and plums into jams and jellies.

Archie died on October 22, 1888, at the age of 8, almost three years to the day following the death of his father. His grave is next to that of his father. A year and a half later, on March 17, 1890, Effie died at the age of 16. Though she was on record as being buried at Bethesda, the location of her grave was unknown until 1993 when dates on a small metal marker revealed her burial plot next to that of her little brother.

Joe’s father preceded him in death by two years, but his mother lived until 1900, 15 years after his passing.