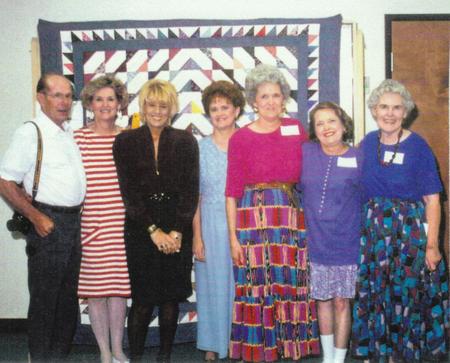 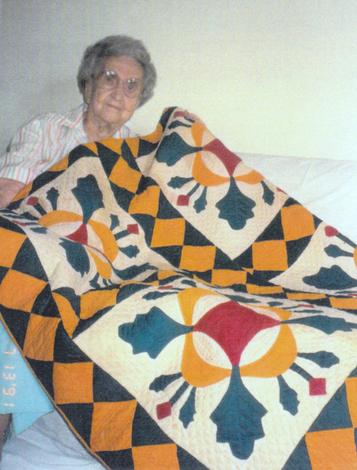 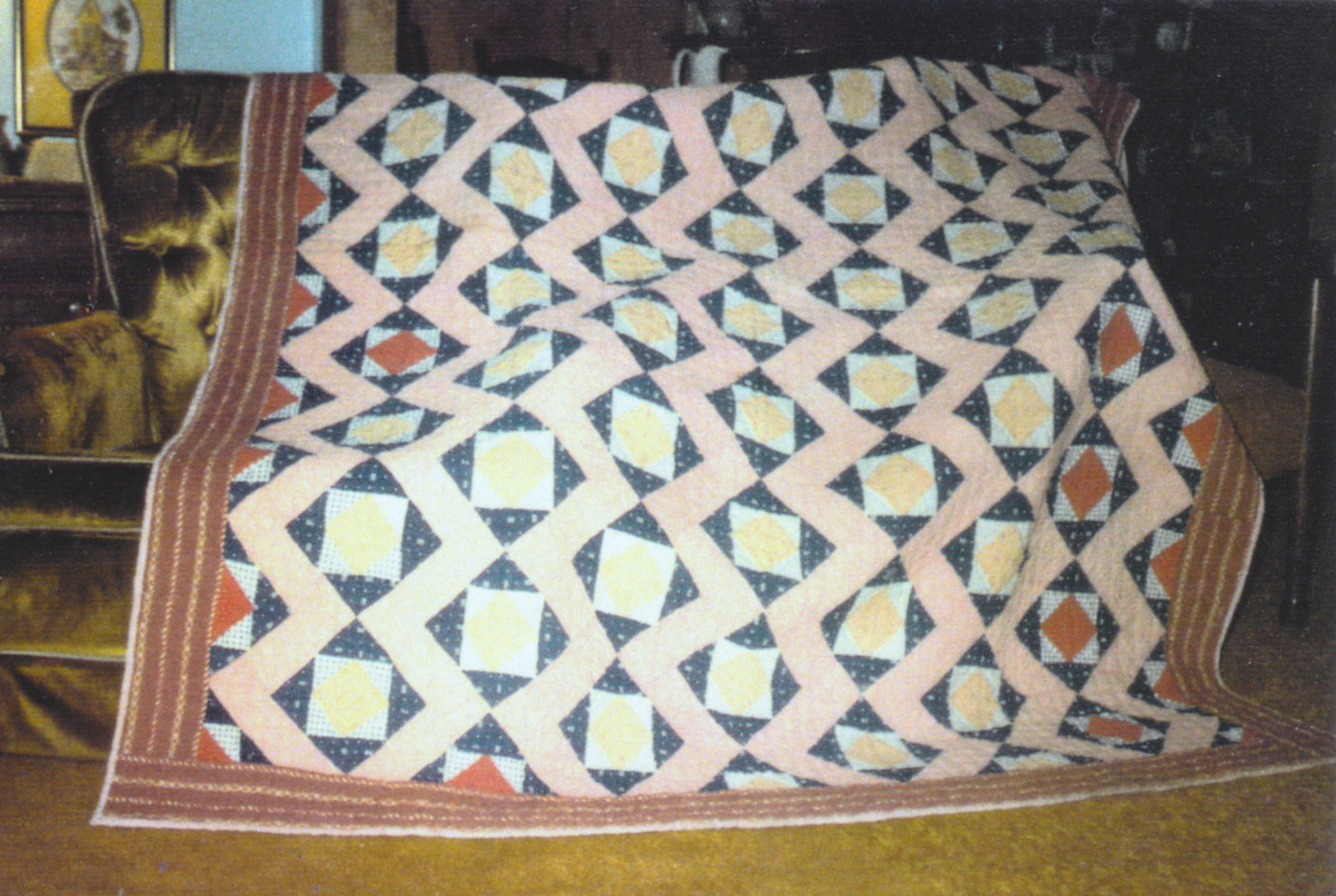 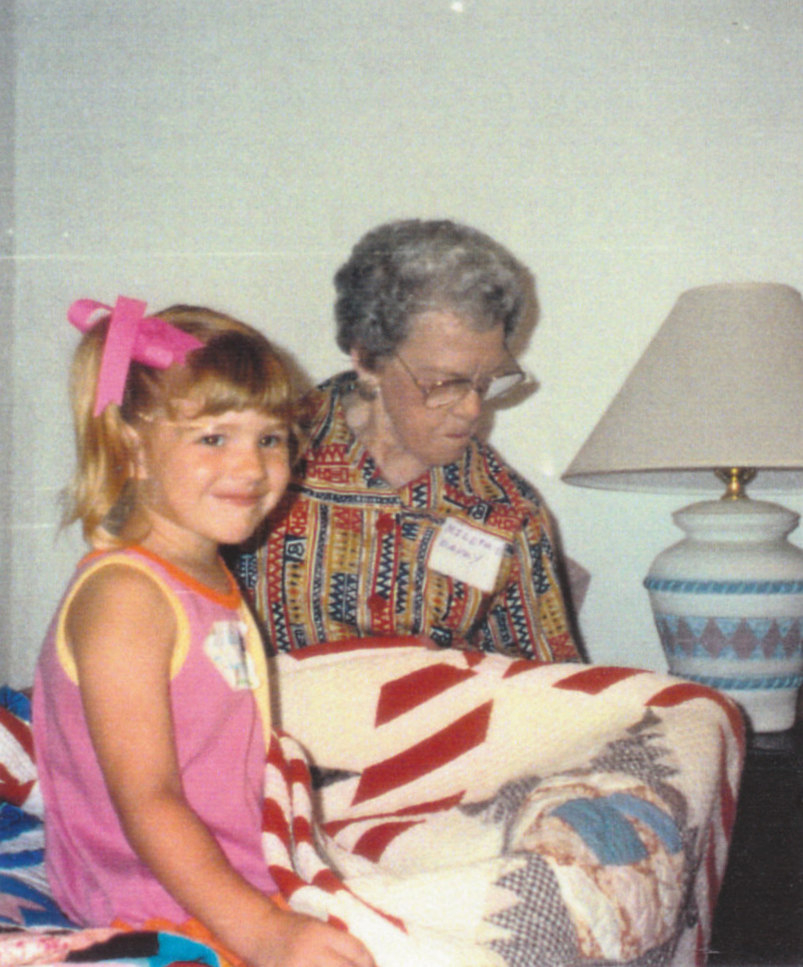 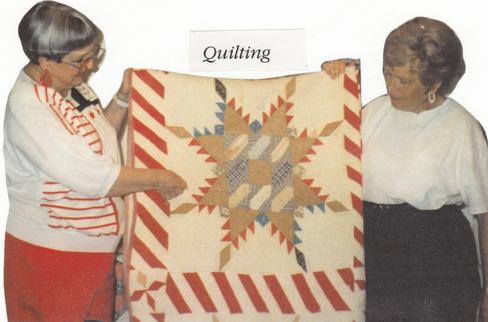 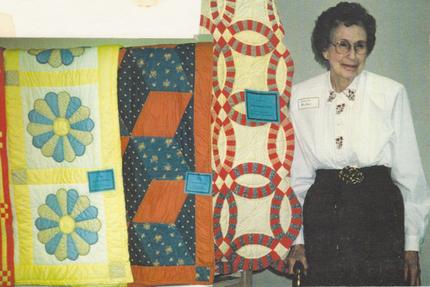 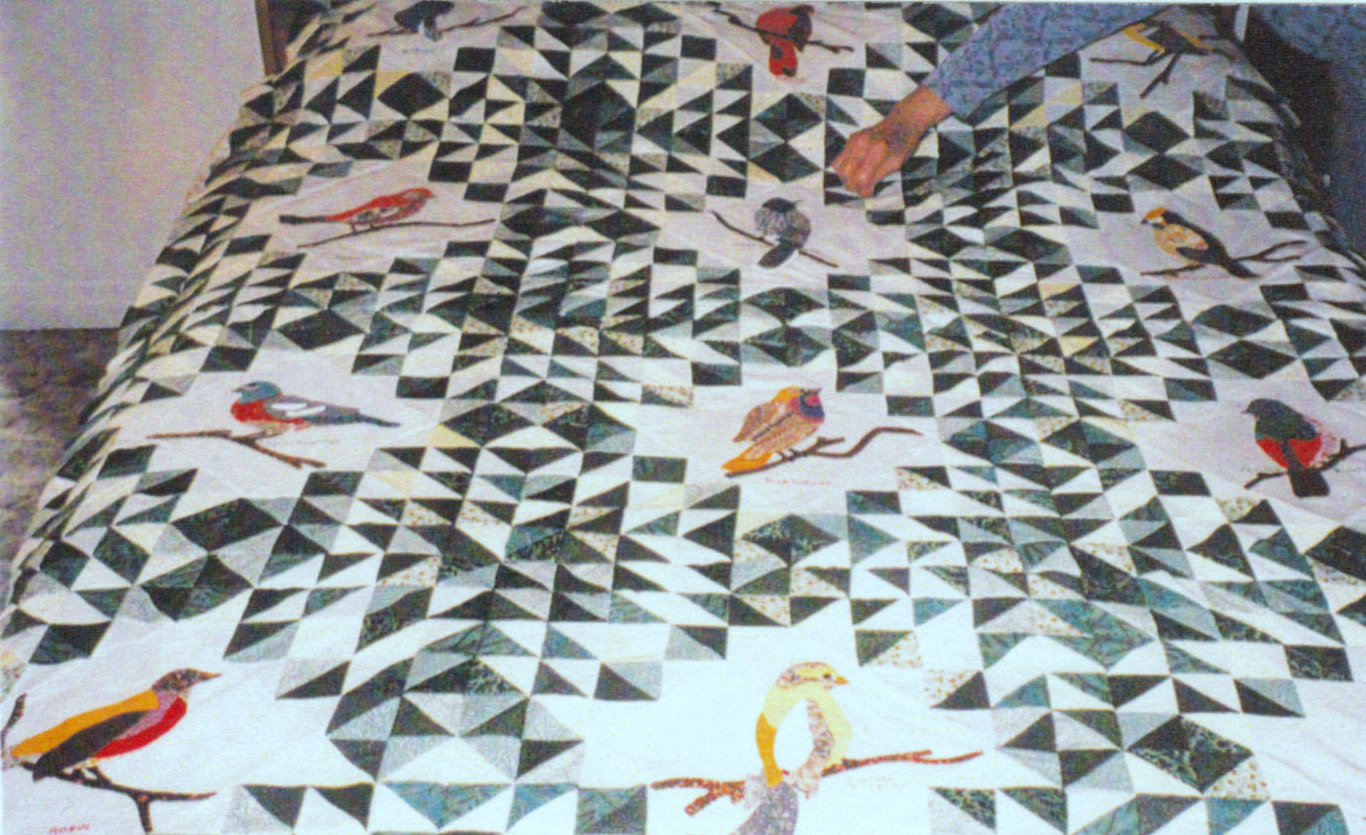 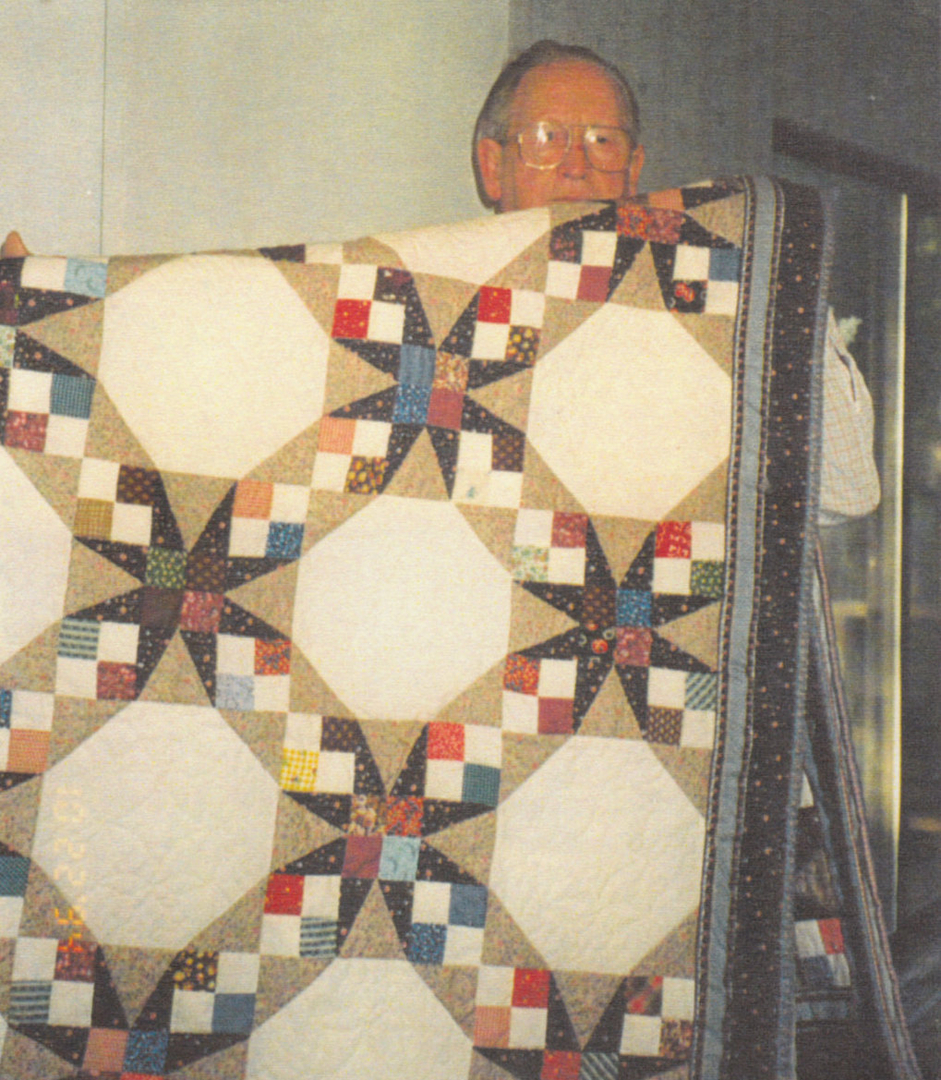 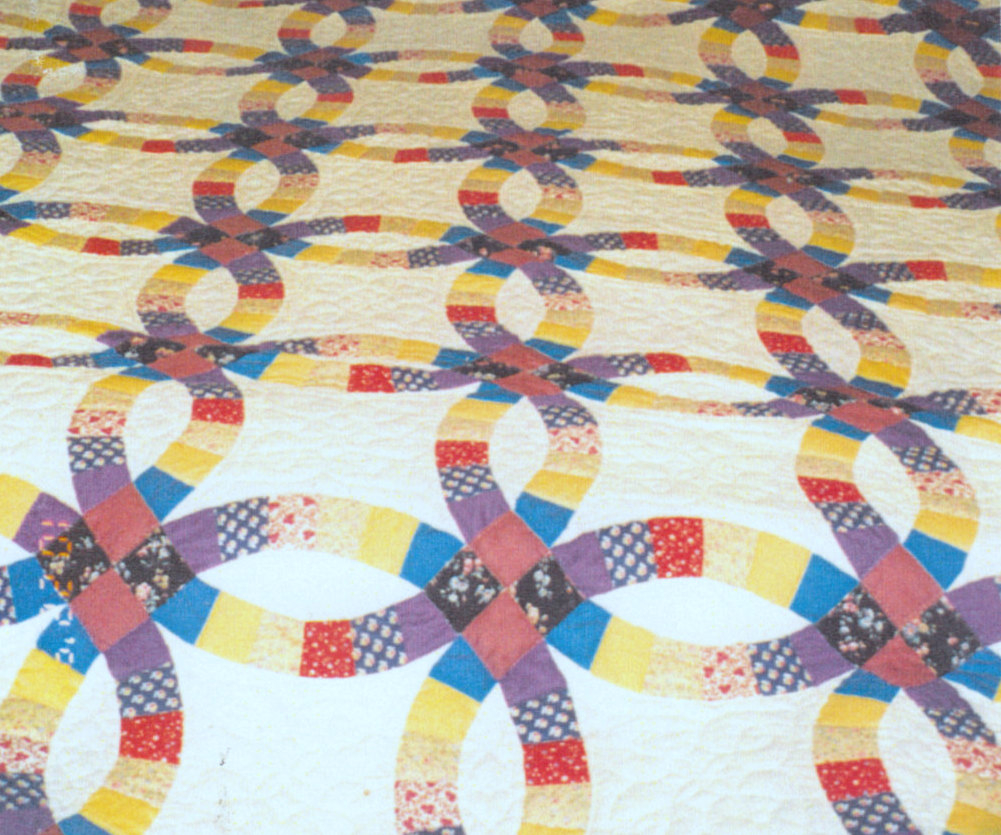 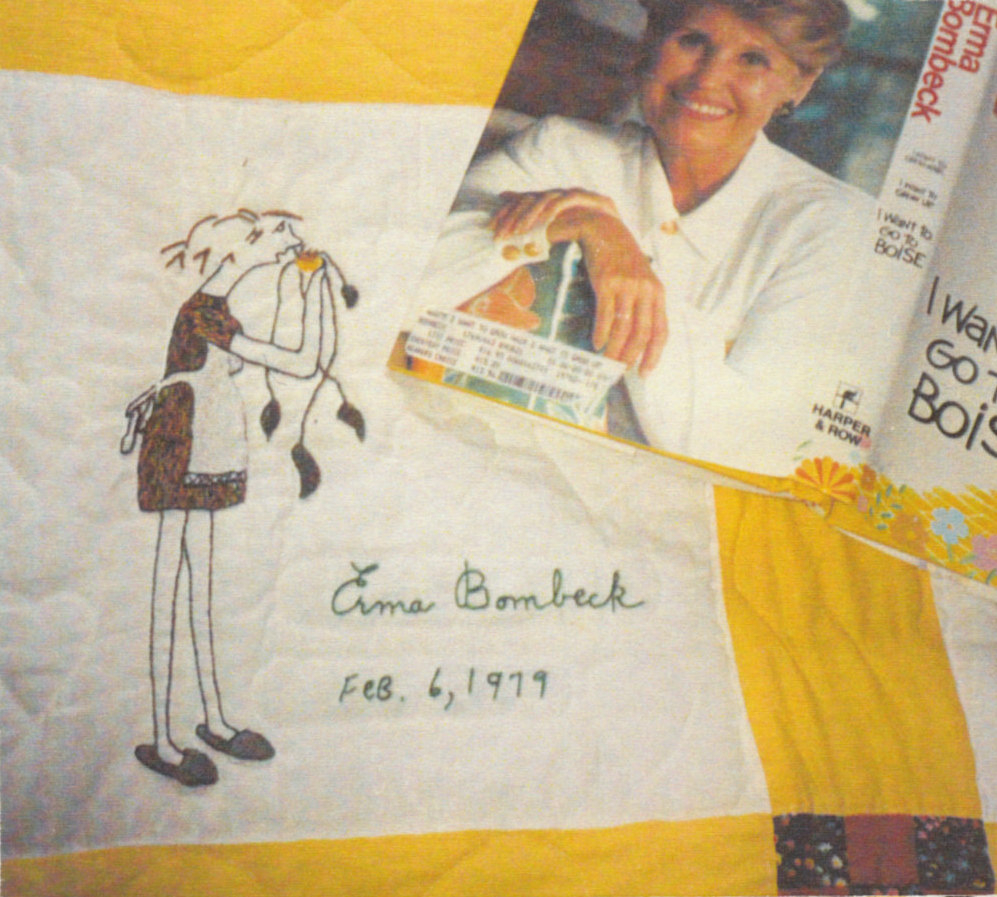 6. Eunice Sybil Kennedy McKay with her prizewinning quilts displayed at the 1996 Family Reunion.

8 & 9. Above: Vivian Castleberry’s Lifetime Friendship Quilt. She asked each friend to put her whole life on a 12-inch cotton square. The different interpretations are a treasure, among them the block of columnist Erma Bombeck showing the tired housewife displaying a dead potted plant.

7. Quilt-making is a hobby that Curtis and Vivian Anderson Castleberry and his mother Ernestine McGowan Castleberry share. Curt cuts the pieces, his mother sews them, and Vivian does the quilting. They are making quilts for each of Vivian and Curt’s grandchildren. This is Treetop Serenade, a pieced and appliqued quilt claimed by daughter Cathy and her daughter Ashley.

5. Wanda Sue Henderson Swann, third from right, is one of the best quilters in the fifth generation of the Hendersons in Texas. In 1994–95, she made the quilt “Connections” at left, using the signatures of family members who had signed the Henderson Family Reunion rosters. This lineup of fifth-generation Hendersons includes Quinton Travis Anderson, Shirley Ann Henderson Coke, Kris Burton, Bobbie June Henderson Granberry, Sue Swann, Norma Jean Henderson Christopher Regan, and Vivian Lou Anderson Castleberry, who treasures the quilt, a gift from Sue.

4. "Uncle Willie's Quilt" (see story here) was made by Eleanor Ann Selina Shelby Henderson around 1880 for her grandson William Washington Dobbins (son of Mary Amanda). After Willie’s death in 1896, the quilt was treasured by his sister Essie Lorilla Dobbins Hensley and passed on to her daughter Roserma Hensley Arnold. It is now owned by Roserma’s son and daughter-in-law Harry L. Arnold Jr. and Marilyn Gail Wood Arnold.

2. The Lone Star quilt is inspected by Dora’s granddaughter Mildred Henderson Davey and great x3 granddaughter Libby. A century had passed since its creation.