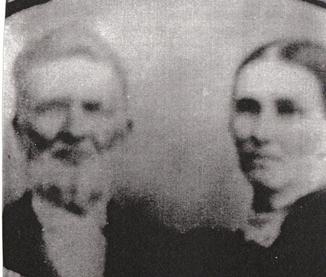 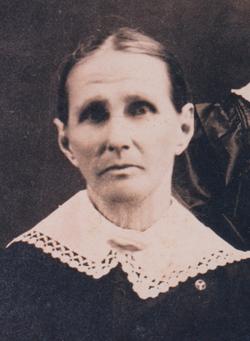 This not-so-great photocopy is of John Wesley Arendell and Margaret Isabelle Henderson Arendell.

The William Lee Hendersons now had three little girls. They lived in Mecklenburg County, North Carolina, where all their daughters were born and the family’s long Christian heritage found them worshipping at Hopewell Presbyterian Church in the village of Huntersville not far from Charlotte. The Hendersons’ Presbyterian heritage dates back to Scotland.

She spent her early childhood years in Mecklenburg County, and when she was still a young child, she moved with her parents and four siblings to Perry County, Alabama, near today’s village of Heiberger. It was there she grew to maturity.

Very early in her life, Margaret Isabelle’s name was shortened to Belle, a name she would carry for the rest of her life.[1]

Belle was 34 and John 40 when the Henderson family moved to Texas in 1879. They had six children: Zoe Emma born on November 1, 1868; Lela Gertrude on June 18, 1870; Virgella “Virgie” on May 21, 1872; Leota on July 21, 1875; Mathis Marvin on May 22, 1878; and Wesley Weightman on November 29, 1881. This would mean that the first five children were born in Alabama and Wesley in Texas almost exactly two years after the family arrived in Lindale. Leota died at the age of 5 years and 11 months on June 21, 1881. Her death is noted in John Madison Henderson’s journal, “I heard the sad news. Sis Belle’s youngest little girl’s death . . . departed this life at half past 12 p.m.” She was buried at Sand Flat at Sand Flat Cemetery, her death coming four months before the first burial in Bethesda Cemetery. Neither membership nor baptismal records of Bethesda Presbyterian Church includes an Arendell name.

There are frequent and fond mentions of the Arendells in John’s journal, usually with reference to “Bro. Wes” or “Arendells.” He made syrup for Bro. Wes, helped him with the plowing; on November 3, 1883, went to Arendells for dinner with Sis Sallie and Cousin Mollie,[2] and on March 1, 1884, he and his new wife, Mollie, “taken dinner with Brother-in-law Arendell.”

On Wednesday, November 5, 1890, the Arendells left Lindale to move to Coleman County, Texas. John Henderson noted in his journal that he “helped Bro. Arendell load up to head for the west portion of this state.” Coleman was about 250 miles west of Lindale. Prior to their move, their oldest daughter Zoe Emma had married Robert Perry Wilson on August 8, 1886, in Bethesda Presbyterian Church. Zoe was 17 years and three months old. In the summer of 1892, the Arendells returned to Bethesda community on a visit. John’s journal on July 19, 1892, says, “Brother-in-law Arendell, wife and babies got here from Coleman County on a visit,” and two weeks later on August 1, he penned “Got Bro. Arendell off to Coleman Co.”

Through the years, Belle Henderson Arendell often came home to visit her sisters and other family members. Zoe Emma and her young husband probably accompanied her parents to Coleman County because their first child was born in Smith County in 1888; their next two in Coleman County in 1891 and 1893 and their three youngest in Milam County in 1895–98.

One reason that record keeping in the Henderson family is so difficult is that there was so much intermarriage. The Arendells are a prime example. Three sisters married Wilsons—Zoe Emma to Robert Perry Wilson; Lela Gertrude to Lee M. Wilson, and Virgie to Willis Wilson.

The Arendells eventually moved to Gause, Texas, near Hearne, where John Wesley died on August 17, 1900. Margaret outlived him for 19 years, and died on December 2, 1919. Both are buried near the entranceway of Gause Cemetery. Their son Wesley Weightman, who died unmarried at age 32, is buried beside them.