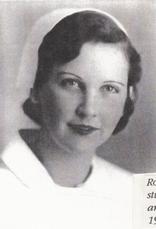 The Persistent Peony
By Roserma Hensley Arnold, Written May 1991

The year was 1879 and the Henderson family was packing up in Perry County, Alabama, to move to Lindale, Texas. The women in the family knew they must travel lightly but they could not bear to leave behind all of the treasures they had accumulated through the years.

Among these treasures was a plant, hardy enough to flourish in the torrid summers, to remain alive during the coldest weather, to withstand drought and floods and every year to bear mammoth vibrant flowers. It was called a peony.
The women took a piece of the plant, nourished it across the country and replanted it as soon as they reached their new home in East Texas. It thrived.

Several years later when Mary Amanda Henderson Dobbins, her husband Uriah B. Dobbins and their family moved from Lindale, Texas, to Wynnewood, Indian Territory, they took a part of the plant with them. Replanted in its new home, the plant thrived. When daughter Essie married, a piece of the plant went with her and her bridegroom to their newly established home five miles north of Wynnewood, Oklahoma.

For half a century, the plant survived and thrived there. Then, when the Hensleys, who were my parents, had to give up farming and move into the town of Wynnewood, she dug up the plant and took it along with her.

Mother died in 1967. My brother and his wife Lydia moved the plant back to their home in the country, some quarter of a mile from the old home place.

I have taken pieces of it for myself and for family members back in Smith County not far from Lindale where it first took root so many years ago. Under all of these conditions it survives.

Perhaps the descendants of our Henderson ancestors are, like this plant, survivors. Or, perhaps the plant, like the Hendersons, is sufficiently tough and resilient to thrive under all kinds of conditions?