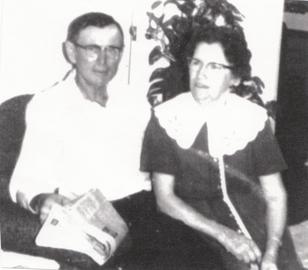 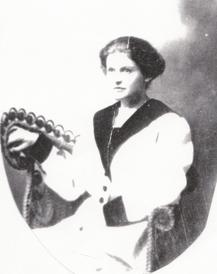 My mother, Nora Haseltine Hicks Henderson, died at the age of 45 with cancer. I was only eight years at the time. My sister and brother, Mary Frances and Jean Henderson, were 10 and 12 years old.

I don’t remember much about my mother except her being sick and in bed.

We had this wonderful family move in with us—Perry and Eunice Ashcraft and their son C. D. They were a wonderful Christian family and had a big influence on my life. “Miss Eunice” was just my second mother. She was so loving and kind. After three years they moved into a house that my dad, Ward Henderson, had on the farm across from Bethesda Church. We stayed in close contact up until the time of the Ashcrafts’ deaths.

Another couple moved in with us by the name of Alvin and Pauline Graham. They only lived with us for one year. We were then left alone with my dad to run the house, cook, go to school and do some work on the farm.

My dad was a wonderful dad and a hard worker. It was hard on him to serve both as dad and mother. My daddy always said he didn’t want anyone else to raise his children.

After eight years, he started to date Mamie Howard Richards, who lived at White Oak, Texas. She and he had grown up in the same area and attended Saline School. She had been widowed for 17 years. After six months of dating, they married, and Mamie came to live with us.

I am sure that it wasn’t always easy for Mamie with three teenagers, but she was a wonderful step-mother.

My husband, James Malcolm Massey, was called back into service during the Korean War. I went home for a few months until my first child was born. When he was six weeks old, Malcolm came for us to live in New Mexico. After a short time, he had to go to England. My brother Jean rode the train out to drive me and my son Don back to live with my dad and Mamie. Mamie always said that she couldn’t tell any difference from my children and her own grandchildren. She showed love to each of us.

The first eight years of my life was with my mother and dad, then four years with the Ashcrafts and Grahams. Mamie was a part of my life for the next four years until I married . . . and then twice in my life after I married.

“Miss Eunice” and Mamie helped to influence my life and they were both loving and caring.