Many of the records of Bethesda Presbyterian Church and Cemetery have been lost or destroyed through the years, and often the threads of events are recorded only in shared stories. These are often incomplete and sometimes inaccurate because they are subject to human error, failed memory, false interpretation, and—sometimes—deliberate withholding or adding of facts. Every survivor of any branch of the Hendersons must add her or his own truth.

A few precious records do survive. These priceless bits of history, usually handwritten with misspelled words and incomplete information, look so innocent on the yellowed paper that holds the words. But they give the bare facts that are a continuing legacy to the Hendersons.

Among these are the minutes of the cemetery association organization, dated May 23, 1905. It reads:

“The community interested in the semetery met and after cleaning off the yard all agreed to work the yard by taxation and went in to election of officers: J. M. Henderson, Pres.; H. C. Crews, Sect-tr.; J. M. Hicks, T.C. Pierce, W. S. Cole, E. L. Howard, W. J. Wadell, comitie. The comitie imployed F. L. Starns to superentend the work on the yard at one and 50 cts per day.”

Two acres of land was donated by William D. Henderson off the northwest corner of his farm and two acres donated by his sister, Mrs. Mary Dobbins, for a cemetery and church yard. The church was organized by William Lee and wife, Eleanor S. Henderson, about 1879 or 1880.

Before the cemetery could be cleared and layed off their youngest son, Franklin Smith, died and was the first grave put in the cemetery in the woods on Oct. 15, 1881. His brothers went next day and built a fence around the grave to keep stock off till they could fence the yard.

William Lee and Eleanor Selina Henderson with 7 of their 9 children with their wives and husbands are buried here and a nephew Hugh Henderson and his wife Bettie.

People interested in the yard would meet about once a year and work the yard. In 1905 a son-in-law of the Hendersons organized the Bethesda Association. The first officers were J. M. Henderson, chairman, and H. C. Crews, secretary-treasurer. Committee members included J. M. Hicks, T. C. Pierce, W. S. Cole, W. J. Wadill. The committee employed F. S. Starnes to work the yard at $.50 per day. Down through the years, these men have been employed as caretakers or yard men: H. R. Crews, H. C. Crews, Dolphie Crews, W. H. Gibson, C. L. Howard and Dewey Lyons.

They have had a beautification committee each year to set out plants or flowers. Emmett Henderson, owner of Henderson’s Nursery, Athens, donated hedge, crepe myrtles and roses in memory of his father and mother, Hugh and Bettie Henderson.

In 1953, the beautification committee composed of the following ladies: Nora Mallory, Tommy Mae Kimerly, Mattie Lou Hall, Helen Shores, Leta Mae Pool decided to do something outstanding for the cemetery. Working faithfully they were successful in getting enough money to erect a chain link fence with a beautiful arch over the gate. Total cost was $978.50.

We haven’t missed having a Memorial service each July since it was organized fifty years ago.

It is interesting to note that the land given by U. B. Dobbins was really the gift of his wife, Mary Amanda Henderson McGahey Dobbins. During that time, and for years afterward, married women were legally non-persons in Texas and could not buy, sell or trade property. As soon as they were married, everything women owned became the property of their husbands and only the men’s signature appeared on legal documents.

A history of the cemetery on its 65th anniversary was written in 1956 by Minnie Lee Henderson Hawkins, the daughter of William Daniel and Dora Mitchell Perkins Henderson.

“State of Texas, County of Smith:

Two acres out the SouthWest corner of U. B. Dobbins and Two acres out of the North West Corner of W. D. Henderson, (there follows explicit directions of the gift including points marked by blackjack trees, other trees, posts and stakes in the all 4 acres), to have and to hold the above described land together with all and singular the rights and appurtenances that in anywise belonging with the said Presbyterian Church, their heirs or assignees forever.

And we do hereby bind ourselves, our heirs, executors and administrators to warrant and forever defend all and singular the said land unto the Presbyterian Church forever against every person from whomever lawfully claiming or to claim the same or any part thereof.

The grave and marker of Franklin Smith Henderson, the youngest child of William Lee and Eleanor Selina Shelby Henderson, who died in 1881 at age 21. His is the first grave in Bethesda Cemetery.

The cemetery was organized in 1882, but the first grave was placed on October 16, 1881, when Franklin Smith Henderson I, the youngest son of the founders, was buried among the trees near the church. It was the youthful Franklin who had insisted that a cemetery be laid out. With a wisdom beyond his years—only 17 when his parents, brothers and sisters, nieces and nephews pulled up stakes in Perry County, Alabama, and set down roots in East Texas—Franklin very early assumed a leadership role in the family.

On March 26, 1881, 20 days after his 21st birthday, Franklin was named a deacon in the newly created church. It was in this role, no doubt, that he prodded the church elders, his father, the 73-year-old patriarch, William Lee Henderson, and his older brother, 36-year-old Joseph Asmon, to be about laying out a cemetery. Bethesda Church, incidentally, was a real birthday present for Joseph A., who was 36 the day before it was officially chartered.

Before the cemetery could be laid and fenced, Franklin died. His is the first grave in cemetery, unmarked as such except with his name and the date of his birth and death. The modest marker is topped by a crown with a hand underneath pointing to it and surrounded by engravings of the “flock.” The inscription reads “F. Smith, son of W. L. & E. S. Henderson. Born in Perry County, Ala. March 6, 1860: Died Oct. 15, 1881.” 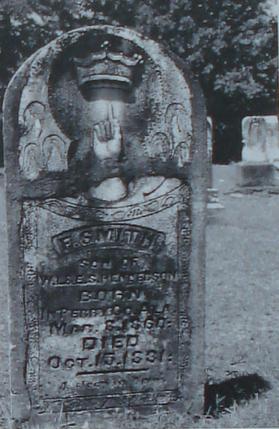 Dr. Thomas R. White’s observation that the founders of Bethesda “now sleep in their narrow homes in the silent cemetery,” and that “the death . . . of such . . . was the life of the church” continues to be credible through the years. Seldom does a year pass that some family member is not brought home to rest in that plot immediately behind Bethesda Presbyterian Church.

For many, this spot as a final resting place is like coming home, for they have played among the graves as small children, have helped their parents “work” the cemetery, pulling weeds and laying back the grass. They have attended funerals here on the coldest of winter days and sweltered at church services, Memorial Day reunions and other funerals in the hottest July and August days. For others, this is the choice of survivors as a pivotal place, a small plot on the earth that is their own, where their loved ones can rest among kin. Cemeteries and mausoleums generally do not hold a compelling sense of place and time as they do to many peoples in other lands, but here in Bethesda Cemetery for most of us there is that hold.

We always hear at most funerals and in eulogies following wars particularly, that the deceased has not died in vain but will continue forever in the hearts and minds of those who survive. I have always doubted this. As a brash kid it seemed to me that dead is dead and whatever is to come will be without my paying a lot of personal attention to it. And yet . . . and yet, here in Bethesda I feel among my people. I wish I had recognized this sooner for I would most certainly have had my own parents buried here rather than in the Athens Cemetery that, at the time, seemed more like home to me.