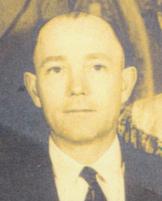 Fred Asmon Hudson, Sr. (1898-1989) as a teenager (left) and as a father of four (right). He was the son of Etta Henderson Hudson and Charles Morton Hudson, and grandson of Joseph Asmon Henderson. 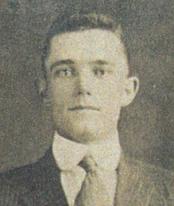 Going to Town
By Fred A. Hudson, Sr.

Well, I grew up out on the river north of Lindale and Tyler—North of Tyler 18 miles. I’d never been to town—that is, to Tyler. When I was 12 years old (1910), Uncle Henry and Aunt Sally Crews came home with us from church for dinner and after dinner we were sitting on the porch talking—me, my Dad and Uncle Henry.

We had just received a postcard from somebody in Tyler. It showed the new courthouse. Uncle Henry said, “You know that courthouse is nearly shoulder high when I saw it.” It showed it in that picture complete. I couldn’t imagine how that could be. He says “That’s how it is.” I said I’d never been to Tyler. He says “I’ll tell you what you do. You come down to my house next Tuesday evening and stay all night. We’ll get up early Wednesday morning and we’ll go to Tyler.” I don’t know how I got “ahold” of 50¢ to carry with me—whether my Mother gave it to me or my Dad gave to me or whether I had worked all day for 50¢ somewhere, but I had 50¢, and I carried it with me to Tyler.

We got up early the next morning before daylight. He had a good wagon and one mule and a horse. We had a two-horse wagon and a mule and a horse hooked to it. They were good ones and stepped lively and felt good. We went down the old Dallas-Shreveport road toward Shreveport to Saline Creek. When we got there, we took a right and on that road we went. Got to Tyler at 10 o’clock—took us four hours. That’s the furtherest I’d ever been away from home.

Uncle Henry had his wagon loaded with farm produce. Had it in tubs and buckets and baskets. He had baskets of green peas he sold. He had milk and butter in a tub with water around it and a shade over the top—a pine top or something. Took him about an hour to peddle all his produce out—butter, eggs, peas, beans, heads of cabbage. We drove a little further into town and hit a paved street, paved with brick! I know I wondered how the economy could stand to have streets in Tyler paved with brick. That was in 1910—I was 12 years old that year.

We went on downtown. He carried the team down to the wagon yard where he pulled the harness off so the horses could rest good. Left the wagon sitting in the wagon yard in the hot sun. We went on up town. Uncle Taylor Sheets had a grocery store on the corner right up town. We went in there and Uncle Henry said, “This is Charlie’s boy,” and Uncle Taylor said “Oh yeah, come around here Fred.” He took me around to his cold drink stand where he had soda water and other stuff. He drew me a big mug full of soda water, I sat up there on that stool, and I thought that was the finest drink I had ever had in my life. I drank that up.

He went on about his business taking orders and filling them, getting the delivery going with the stuff. Customers would phone in the orders, and he delivered it out. Between times he would be opening stuff up and put out in stock. He opened up a crate of grapes—white grapes. He said, “You ought to taste them, Fred here,” He handed me a little bunch of grapes, I tasted them—man, they were the best grapes I ever tasted in my life. They didn’t have any seeds in them—white looking grapes. I said “Give me 50¢ worth of them, please, Uncle Taylor.” He got a sack and filled that sack with those white grapes. By that time my feet were killing me. I had my shoes on, and I was use to going barefooted.

I went down to the cotton yard or rather the wagon yard, got up on the front seat of that wagon out in that hot sun and ate 50¢ worth of grapes. I didn’t want any more grapes for a year. Finally I went on back up town. Uncle Henry gave me a quarter. He saw I had spent all my money—throwed it away on those grapes.

We went down to L____, that was a 10¢ store—they called it in that day. First thing I bought me was a watch fob. I had a 67¢ Sears Roebuck watch that I had picked strawberries in the spring and bought, but I didn’t have a watch fob. So I saw a watch fob that had little wheels you could turn on it. One said strike one, ball one and so many outs on it so you could umpire a ball game. It was a umpire’s watch fob that I bought. I know Uncle Henry did all his trading. Women would send by him for 10 yards of calico to make them a dress, another sent by him for two or three window shades—they were 35¢ each—the window shades were—she’d saved up enough, sold eggs, and enough money she’d sent by him. Bought all that stuff for neighbors.

Finally about 4 o’clock he said, “Well, it’s time to go,” and we went to go home. Came out and crossed old Black Fork Creek right this side. I’ve gone up that way here awhile back to see where the old road went. The highway doesn’t go where the old road turned. We went on up through there. About 6:30 we got into Lindale and he was going on home. He says, “We’ll go out home and you stay all night and you can go on in the morning.” But it was just as close to my house as it was from his so I told him I’d just get out and walk to my house—it was 4 miles down through there to my house. Before I could get home it began to get pretty dark. I went on and made it in. That was the first time I ever got to go to town.