The 1860 census notes their community and post office as “Jericho,” which was located only one and a quarter miles northeast of the later-named Heiberger. An 1865 map and an 1895 atlas show Jericho, but not Heiberger. The Jericho post office operated from 1836-1907, while the Heiberger post office was not established until 1904.

Interestingly, the next census (1870) lists their post office as “Marion,” but their home as “Township 21, Range 8,” which was much closer to Jericho than Marion. (On above map, the square marked "1 WL Henderson" is within that township.) Perhaps the Jericho post office did not operate continuously.

According to the plaque that hangs on the Heiberger Post Office building, it served two rural routes covering an area of seventy square miles. It refers to the former Jericho post office as a “rural mail station.”

The name Heiberger may have only gained popularity after the new Heiberger post office edged out Jericho’s. As community names, both Heiberger and Jericho referred to large areas of farms that stretched for miles. Frustratingly little about either community’s history is readily available online.

Today Heiberger is an unincorporated community. It appears on maps, but its postal addresses are considered to be in Marion, a city ten miles away.

Heiberger is best known for being the birthplace of Coretta Scott King (1927-2006), but her birthplace is often reported as Marion because of the change in postal city. Indeed, this important civil rights leader, born almost fifty years after the Hendersons’ departure, lived less than three miles west of their former land in what was considered Heiberger.

Below: Heiberger's former post office in 1989, and Google Street View scene of the building now. It has been refurbished and houses a small museum.

Ten miles south, the city of Marion—the county seat of Perry County—was fully established with a population of about 2,000 when the Hendersons lived in Alabama. The 1980 census revealed a population of more than 4,400.*

During our 1989 visit, we found Marion to have an ambience of old Southern beauty, charm, and hospitality. It is clean and neat and genteel. The streets surrounding the Perry County Courthouse (built in 1856) are wide and in excellent condition. Marion takes great pride in its historic buildings and old homes and preserves them with painstaking care. Many old homes have remained in one family for years.

Magnolias are everywhere in Marion. Their giant branches all but encase many of the old Southern mansions and their large waxy leaves spread more than shade: they extend an aura of hospitality that is pure Old South. For some ineffable reason it is comforting to know that these stately old trees were already growing and, I like to think, cast their lovely shade on my ancestors of yesteryear when they were brides: Great Grandmother Samantha Jane LaGrone and Great Aunts Mary Amanda Henderson, Martha Elizabeth Henderson, Margaret Isabelle Henderson, and Harriet Caroline Henderson. 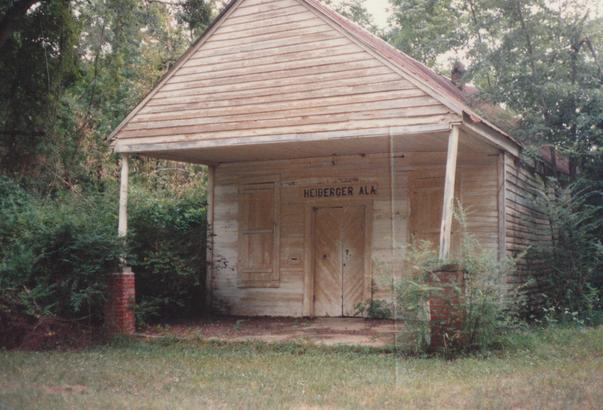 The Hendersons migrated first from Mecklenburg County, North Carolina, to Perry County, Alabama, sometime between 1851 and 1852. We know this because their fifth child, Harriet Caroline, was born in North Carolina on November 11, 1850, and their sixth child, Sarah Jane "Sallie," joined the family in Alabama on January 12, 1853.

No records reveal the reason for their move to Alabama, just as there is no clear information of what caused them to leave Alabama for Texas. One story about their Texas move is that the Hendersons opposed slavery and insisted, following the Civil War, upon opening membership in the Bethesda Presbyterian Church to their black neighbors. This made them very unpopular among the people in Alabama during “reconstruction” following the Civil War.

According to Perry County records, William and Eleanor sold an 84-acre farm in Bethesda Community, near today's Heiberger, to Ned M. Laughlin, a “freedman,” for $200 ($2.38 per acre) on December 5, 1870. There is some reason to question this official record, because the bill of sale was not filed until September 25, 1880, or recorded until October 27, 1880. The facts surrounding the sale of this property are not clear, but it is safe to speculate that the sale, in Alabama, so soon after the Civil War by a white landowner to a black freedman would not have enhanced the popularity of the family among their neighbors.

The Hendersons left the Heiberger area before anyone now living (1989) was born, but Lowell (Lewell?) Moore, a delightful man of some years, who lives up the hill some 200 yards from the closed Heiberger post office, says he recalls his family talking about the Henderson family who once lived in the community.

KERIN'S NOTE on MAP: The polygons show two pieces of land that William Lee Henderson owned in 1858. Their home was more likely to have been in the square (1), not the L-shaped polygon (2), as the 1870 census shows them in “Twp 21 R8,” which applies to the square only. He may have owned more land or sold some of this at some point, but these are the only available records I’ve found.

I plotted the land using the Public Land Survey System KML file for Google Earth, which provides a grid layer for townships, available at http://www.metzgerwillard.us/plss/plss.html, and the First Landowners Project at historygeo.com (subscription site).