Before the Hendersons of Alabama had completed their homes in their new East Texas location, or so the story goes, they built a place to worship. It was a small white building located four miles north and east of Lindale. There are several written stories about the founding of this church, and very few discrepancies in the stories. Most of them add to or delete details told by others. Because of the richness of the heritage of Bethesda Church, it is important to include the separate stories, together with whatever duplications occur, as they have come down through the years.

This is the second building of the Bethesda Presbyterian Church near Lindale, Texas, dedicated by the Rev. John McLean on July 14, 1895. It still stands today and is an official Texas Historic Landmark. At bottom, Vivian takes notes at the church in June 1989, during the early stages of writing this book.

Since my childhood, Bethesda has both changed dramatically and remained dramatically the same. The church is still a picture-postcard-pretty white frame building sitting serenely in an oak grove some four miles northeast of Lindale. Today, just as it did when I was a child, it evokes a quickened heartbeat as it appears, still after all these years, as a Christmas-morning-like surprise when I round the gentle curve.

I remember the small brightly colored Sunday School cards my brothers and I got every Sunday. My favorite was Jesus sitting among His flock and blessing the children. “Suffer the little children to come unto me and forbid them not, for of such is the kingdom of heaven.” Along with the Bible verse there would be a bit of a story. There are no specific sermons I remember; perhaps I fidgeted too much. But I remember, vaguely as if in a dream—or maybe I even remember because my mother and grandmother perpetuated the reality—my grandfather’s prayers as he stood, head bowed, adjacent to the pulpit at Bethesda. Even when there was no preacher—and we couldn’t in those days afford to have a full-time minister—there was always Sunday School. My mother was always one of the teachers. In the earlier days, when she was a young woman, she had been the church organist. She had gone into Lindale, on horseback or in a wagon, for five years to take music lessons so that she could play for Sunday worship services and other church-related occasions.

One Sunday stands out vividly in my mind. We were living a mile or so away from the church back toward Lindale. It was Sunday morning and we—Norman, Quinton and I—were dressed in our Sunday best. Daddy had cranked up the old Model T and shepherded all three of us into the back seat of the car. He was waiting impatiently, as he always did when he was ready to go, for Mother to emerge from the house. When she came, also dressed in the best she owned, she turned her ankle and fell down the front steps, slitting her leg from just below the knee to the ankle. The wound gushed blood. Daddy bounded from the car, picked her up, dumped her onto the seat, slid in beside her and headed out the driveway. Instead of turning right onto the road toward church, he turned left toward town.

All three of us in the back seat started to cry. We were not so upset about Mother as we were sad to miss Sunday School. We knew Mother would be all right. She always was! But to miss Sunday School was unthinkable! It took time to find the doctor and even more time for him to sew up the wound on Mother’s leg. By the time it was all finished and we were home again with Mother resting on the bed as Daddy insisted, church was over. Several of the aunts and uncles and cousins dropped by to see what had happened with us. They knew, as we did, that only an emergency kept the kin away from church on Sunday morning.

Bethesda Church provided the social as well as the spiritual sustenance of our lives.

In the days when my mother played the organ for worship, the road leading to it was deeply sand rutted in the summer and pitted with chug holes when it rained, frosted over in slippery ice on a few winter days, and occasionally garbed in pristine snow as it was back on January 30, 1930, when my grandfather John Lee Henderson was brought home there to rest. Weather never deterred the increasing number of devout worshipers who came from miles around in their wagons, in buggies, on horseback, and on foot, to worship.

Now Bethesda Presbyterian Church is but a pretty picture, momentarily glimpsed and as quickly gone, for most of the people who whisk past it in their sleek automobiles on their way from…to…over the gently rolling, gracefully curved East Texas paved highway.

Ah, but there are connections! Many of the hymns are the same words sung to the same music Mother used to pipe on the organ. The “word” is preached from the centuries-old Bible that sustained our ancestors as they made their trek over “foreign” land from Perry County, Alabama to Texas in 1879.

The first thing they did, even before they completed clearing their farmlands and building their homes, was to establish a place of worship. 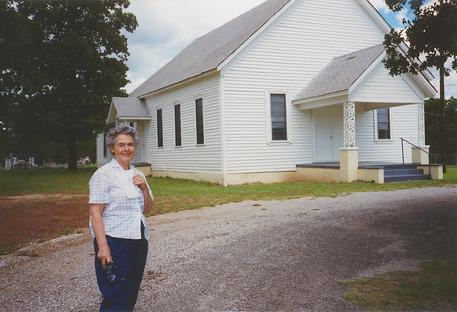 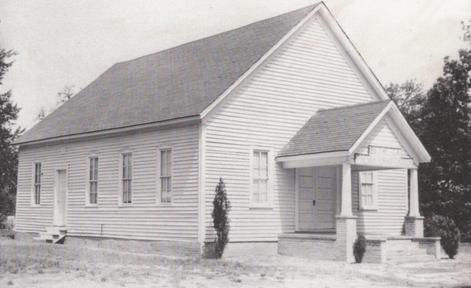