Harriet Caroline Henderson, known throughout her life as Hattie, was born November 10, 1850, to William Lee and Eleanor Ann Selina Shelby Henderson. She joined four older siblings—Mary Amanda, 10; Martha Elizabeth, 8; Margaret Isabelle, 5, and Joseph Asmon, 3. Before the completion of the family there would be four more children, Sarah Jane in 1853, John Madison in 1855, William Daniel in 1858 and Franklin Smith in 1860.

Hattie was born in Mecklenburg County, North Carolina, where she was welcomed by a large and enthusiastic extended family, dozens of Hendersons on her father’s side and many Shelbys on her mother’s side. But she could not have remembered much, if anything, of life in North Carolina because her parents took their children to Perry County, Alabama, about the time she was two years of age.

Hattie’s teenage years were clouded by the Civil War which dominated all of the South from the beginning of 1861 through the spring of 1865 and was followed by a period of Reconstruction, which reconstructed little and ravaged much of the property and morale of the country. The atrocities were especially critical in her state of Alabama.

Hattie was 10 when the war broke out and 14 when it ended. She and her family were among the hundreds of thousands of families who suffered personal losses because of the war.[1] Two of her older sisters, Mary Amanda and Martha Elizabeth, both lost young husbands to the war. Mary Amanda’s second husband Uriah B. Dobbins was a sergeant in the Civil War (Co. F, 20th Alabama Infantry). John Wesley Arendell, a private in the same company, would marry her sister Belle following his release from the Army. Her brother-in-law William T. McGahey, Martha Elizabeth’s second husband, was a veteran of Co. E., Fifth Alabama and 25th Alabama infantries.

Hattie’s brother Joseph Asmon, who was three years her senior, was only 14 when the war began and 18 when it ended. He barely missed being called to service.

The small diary kept by William Daniel Henderson makes several mentions of “Jessy” and “Jesse,” the brother-in-law who was a member of the five-wagon-train trek that the Hendersons made to Texas. Hattie and her four children traveled with her parents and the other sisters and their children by train to make their home in East Texas.

All the families were reunited on Tuesday, December 16, 1879. John Madison Henderson, age 24, in the journals he kept for 25 years starting January 1, 1879, wrote: “We have arrived at the point we have been hunting so long! Found the friends looking as usual.”

Doubtless, for Harriet and Jesse and for the other family couples who were reunited after the 38-day wagon trek in uncertain winter weather and treacherous traveling conditions, John’s journal entry was a master of understatement.

The Crews couple, like that of other family members, began immediately to find a place to live and to acquire property and prepare to make a crop in the spring. They were all farm people. After the uncertainty of the political climate in Alabama they must have been relieved to settle in a place much more serene and peaceful. But one wonders how they felt about the soil of their new home. They left farms in Alabama that were mostly red clay and rugged. In East Texas they found a sandy loam which required far different treatment. John Henderson’s journals divulge much about the manner in which family members went about preparing and planting their new land, cultivating their crops, and harvesting their bounty.

Hattie was busy with her increasing family. Her children were 6, 4, 2, and 10 months when she arrived in Texas and she was soon pregnant with her fifth child and then with a sixth.

When baby Alma (Virgie Alma) was 11 months old, not quite four years after the family moved from Alabama to Texas, Jesse Edwin Crews died on October 14, 1883. Kirk was 10 years old and Dolphie, 8. With the help of other men in the family, the two boys took over the responsibility of the farm. Entry after entry in John Henderson’s journals reveal the extent to which uncles supported their sister and her children. The men would do the heavy work and be paid back by the kids with things they were capable of doing such as the lighter plowing, hoeing, corn gathering, and cotton picking. John wrote about making syrup for Sis Hattie, finding her lost cows, buying a mule, building a cook room, repairing a roof for her, and other helpful tasks.

Without a doubt John assumed the role of surrogate father to Kirk and Dolphie. He was very fond of Sis Hattie’s children, with—if the frequent references are any indication—a special affection for Dolphie. But even with all the support and help, Harriet Caroline Henderson Crews was the person in charge of her growing family.

It is Hattie’s family that has remained closest through the generations to the land they chose when they moved to Texas from Alabama. Her six children married and settled in and near Lindale and Bethesda community. None moved more than a 30-mile radius away from the home place. Many of the grandchildren also settled on or near the original property.

Hattie continued to live on the home place and to worship at Bethesda Presbyterian Church all her life. She had been a widow for 46 years when she died on December 4, 1929. She is buried beside her husband in Bethesda Cemetery. Bethesda is also the final resting place of five of her six children—Kirk, Dolphie, Linnie, Henry, and Alma. Mary Emma Owens, who had lived in Lindale for most of her married life, is buried in the Lindale City Cemetery. 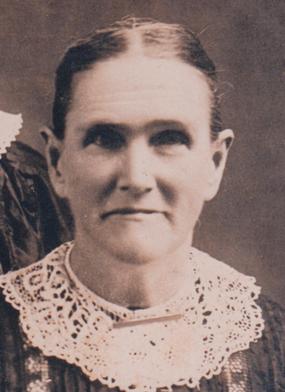