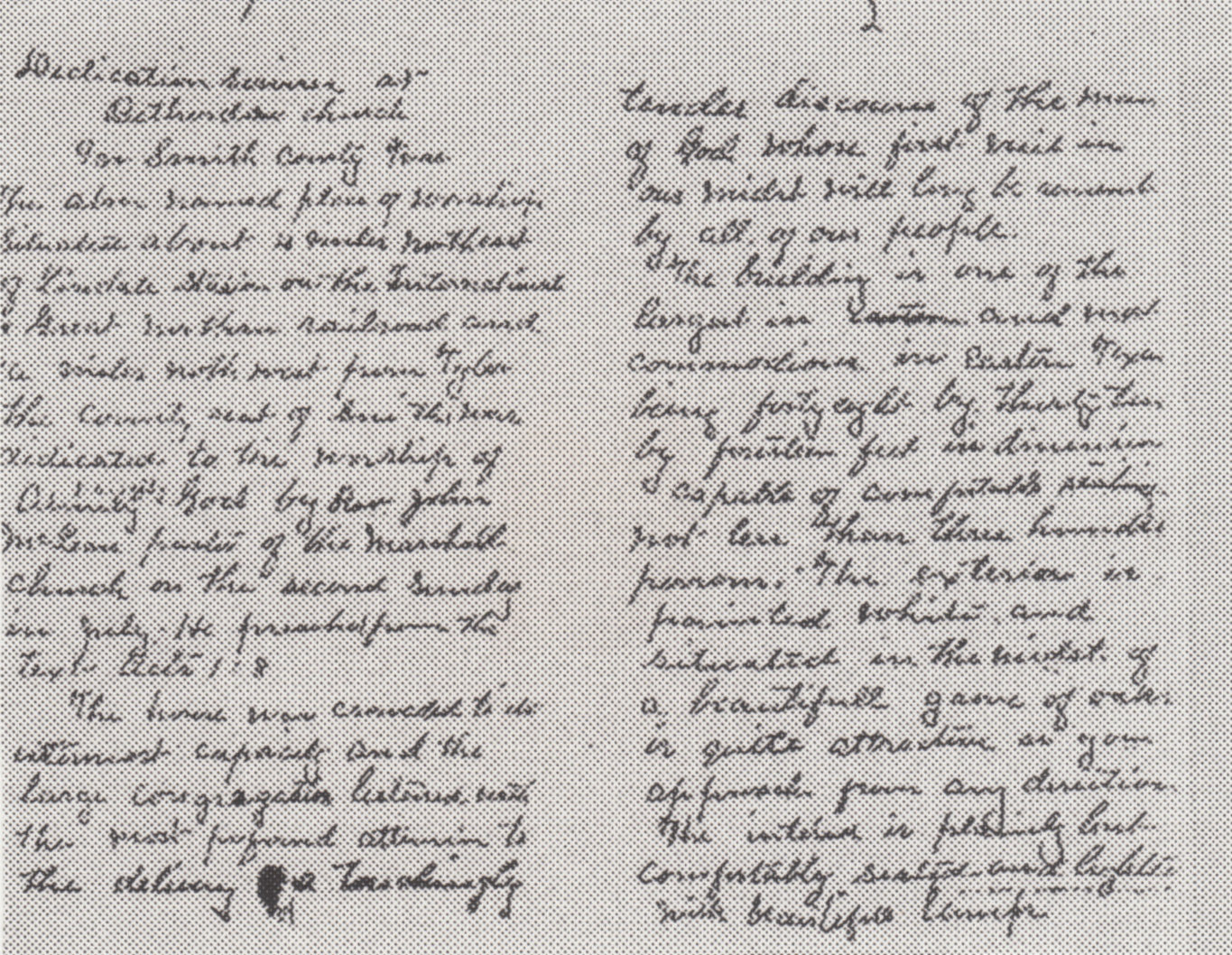 This is a portion of the story in his own handwriting written by Rev. Thomas Ward White for The Christian Observer. The full text is transcribed below.

“The above named place of worship, situated about four miles northeast of Lindale station on the International and Great Northern railroad, and sixteen miles northwest from Tyler, the county seat of Smith, was dedicated to the worship of Almighty God by Rev. John McLean, pastor of the Marshall church, on the second Sabbath of July. He preached from the text Acts 1:8.

("But ye shall receive power, after that the Holy Ghost is come upon you: and ye shall be witnesses unto me both in Jerusalem, and in all Judaea, and in Samaria, and unto the uttermost part of the earth.")

The house was crowded to its utmost capacity, and the large congregation listened with the most profound attention to the delivery of a touchingly tender discourse by the "man of God," whose first visit in our midst will long be remembered by all of our people.

The building is one of the largest and most commodious houses of worship in Eastern Texas, being forty-eight by thirty-two by fourteen feet in dimension, capable of comfortably seating no less than three hundred persons. The exterior is painted white and, situated in the midst of a beautiful grove of oaks, is quite attractive as you approach from any direction. The interior is plainly but comfortably seated, and lighted with beautiful lamps presented by the late lamented J. DeWitt Burkhead, for many years evangelist of the Presbytery of Eastern Texas.

The actual cost of the building was about six hundred dollars, all of which has been paid.

The history of the church is one of deep interest.

All the members, with perhaps one exception, are children, grandchildren and great-grandchildren of one family, which moving to Texas in December, 1879, erected a shelter and obtained the services of a shepherd before building for themselves the plainest residences.

The church was originally organized the 26th of March, 1881, by Rev. W. R. McClelland, appointed by the Presbytery of Eastern Texas under the name of Lindale Presbyterian church. This name it bore until 1885, when it was changed by order of Presbytery to that which it now bears, with a membership of sixteen, ten from the Bethesda Church, Alabama, and six from Tyler with W. L. Henderson and Joseph A. Henderson, ruling elders, with T. A. Love and F. S. Henderson, deacons, all of whom are dead, and now sleep in their narrow homes in the silent cemetery immediately around the house of worship.

Over these graves, the unbidden tear often falls, and yet the death of such men was the life of the church.

In April, 1887, the Presbytery of Eastern Texas held its spring sessions at this place.

The church at present is without a pastor. John M. Henderson and Henry C. Crews are respectively elder and deacon, and since these dedicatory services, we cannot but expect and desire a brighter and better future for a little flock which has struggled so faithfully in the work the Master has given them to do."

On the second Sabbath of July 1895 (that would be July 14, 1895) a new house of worship was dedicated by Rev. John E. McLean, pastor of the Presbyterian Church, Marshall, Texas. The Rev. White of New Birmingham, Texas, provided this write-up for the Christian Observer: