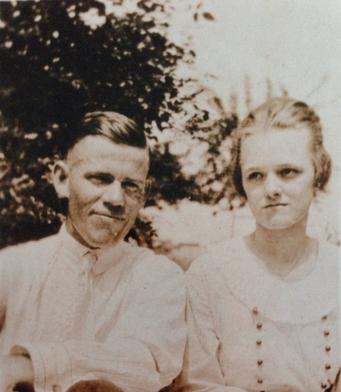 FOREST GROVE, LAKE PALESTINE, CHANDLER, TEXAS, JULY 23, 1989—Seventy years ago today Jessie Lee Henderson, 23, and William Clarence Anderson, 24, repeated wedding vows that would entwine their lives “until death do us part.” Some forty miles from where I now write these words, the late morning ceremony in the farm home of the bride’s parents, John Lee and Lillie Eva Perkins Henderson, in Sabine Community near Lindale, was performed by Rev. Franklin S. Henderson, the bride’s uncle, who was pastor of the First Presbyterian Church in Beaumont, Texas. Family and close friends attended.

The bridegroom had only recently been discharged from the United States Army where he had served in the Ninetieth Division in France during World War I and with the Army of Occupation in Germany following the war. He still wore the army-styled short haircut and with it a suit of dark blue serge, a white shirt with a stiff high collar, and a blue tie dotted with white. Only a month before the wedding he had returned to LaRue with his large family, including his parents Murray Elam and Mary Ellen Parks Anderson.

Minnie Lou York (later to be Hagan), Ina Mae Hudson (later to be Bridges), and William Paul Henderson were honor attendants. Minnie Lou and Ina Mae were close friends of the bride in addition to being first cousins on the paternal side of her family. Minnie Lou was the oldest daughter of Jennie Henderson York and Ina Mae was the daughter of Etta Henderson Hudson. Paul Henderson, best man, was a friend of the bridegroom and also the bride’s half uncle on her mother’s side of the family. His mother was Elizabeth Rebecca Isadora “Dora” Mitchell Perkins Henderson, and his father was William Daniel Henderson, who as a young single man was one of the original settlers of the community.

Paul figured prominently in the liaison because it was he who, two years earlier, had introduced the young couple.

The bride wore a dove-gray tissue taffeta gown fashioned with a rounded neckline above a slight blouson waistline and long sleeves. The ankle-length  skirt was tiered, the tiers banded in gray satin. The waistline was accented with a wide satin sash-belt. Her long hair was caught up in the back, fluffed around her 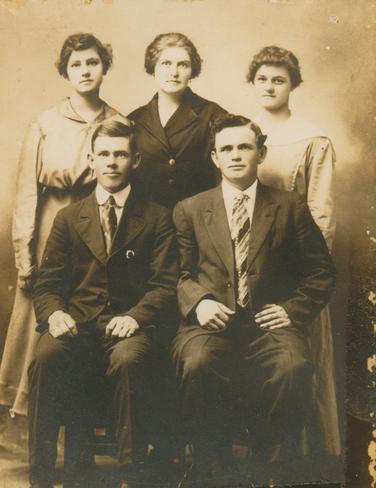 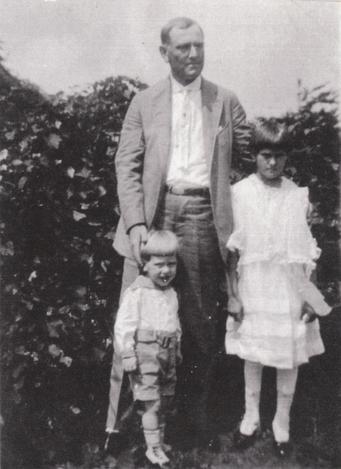 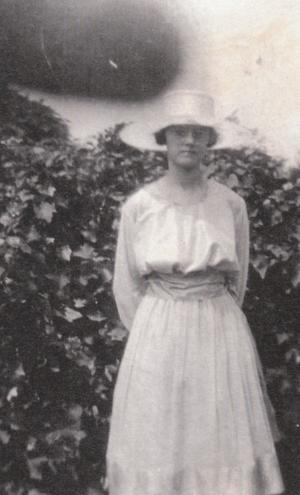 Jessie Lee Henderson on her wedding day. The ceremony took place on July 23, 1919, in the home of her parents, Lee and Eva Henderson.

face, and covered with a wide-brimmed picture hat of taffeta banded in satin, She carried a bouquet of garden flowers, predominantly yellow roses, and wore a cameo broach on a white ribbon around her neck, a gift from the bridegroom who had brought it to her from Germany.

The wedding party tarried for a country-styled lunch after which the newlyweds journeyed to LaRue to make their home, traveling in the Model T Ford purchased by the bridegroom in Athens in 1917.

I have records of those rites in a yellowed clipping from the Lindale newspaper and in photographs taken on July 27, 1919, their wedding day. The pictures, some blurred with the principals hardly recognizable, are all taken out-of-doors because film of that day was not sufficiently sensitive to respond to the indoors.My mother has her face all but obscured by a wide-brimmed hat fashioned of taffeta and satin. Beneath the hat her face is eternally preserved in a somber, somewhat sad, almost-scowl. And, what appears to be a thumb print at the top left corner of the snapshot makes the picture look as if it is being made on a day when a thick storm cloud was behind her. Not so, my mother said, the day was hot and the sun bright. In the only photo of the bride with her bridesmaids and her beloved uncle, his head is cut off so that you cannot be sure of his identity. Nowhere is there a picture of the young couple with the minister who had come from Beaumont to read their vows.

The best picture is of Franklin Henderson with his son “Little Frank” and his niece Mildred Henderson. She was a month shy of her 11th birthday when her big sister got married and the picture clearly shows two things: she did not want to stand still for a picture and she was not happy about the wedding. Franklin has his right hand on his son’s head as if to turn his face to the camera and his left arm lightly around Mildred’s shoulders. She wears a very frilly white dress that appears to be organdy. The waist is ruffled with a high rounded neckline and what appears to be puff sleeves. A deep ruffle at the waistline forms a blouson over a sash. The skirt is tiered and ruffled and drops to just below her knees. She wears white stockings over high-topped shoes, the lower part of slipper-styled black patent and the tops of white buttoned kid. Her head is slightly lowered and her eyes raised to the camera. Her face is fixed in desolation and frustration.

Mildred remembers that she idolized her big sister, twelve years her senior, who was that day’s bride, and that she was miserable. She was less than thrilled at wearing the scratchy organdy dress on that sweltering day and even more upset because she knew the young woman she had shadowed all her life was moving away out of town.

Almost three quarters of a century have passed since this ceremony took place. The bride and bridegroom, resting now in the cemetery in Athens, Texas, where they had made their home for the last 21 years until my father’s death in 1956 and then my mother’s in 1964, enjoyed one of the richest relationships it has been my good fortune to know. There were troubles—lots of them. Illness. Death, Misunderstandings, of property. Loss of dreams. Money! They lived through the Great Depression. Sometimes there was not one thin dime of cash in the house—except, perhaps, for the dollar or so Mother had stashed away in her emergency fund that nobody knew anything about. There was never an emergency sufficiently critical for her to spend it. I am certain that’s why I keep $100 of emergency money tucked safely away! Her one dollar would buy almost the same amount of goods and services that my hundred dollars would purchase today,

Except for slight modifications, the ceremony of 70 years ago could have happened yesterday. Or a century ago. Styles of clothing have changed. Expectations of the roles of men and women are different. Technological advances in medical research, scientific breakthroughs, and diffusion of cultural boundaries have vastly altered lifestyles.
But the throbbing need of individuals to be together—whether in marriage or outside it—the urge to form family units and the compulsion to produce children prevails in all generations, sometimes with variations, but always with recurrent intensity. And the look in my father’s eyes caught in the snapshots in their going-away outfits 70 years ago, a mixture of adoration and awe, is the same I have seen in the eyes of my husband and of the young men who are now our sons-in-law.

So it was that my parents, seven decades ago, began their new life with the hopes and dreams born eternally of youth in much the same way that my daughter and her young husband began their marriage a few weeks ago.

DALLAS, TEXAS, JUNE 5, 1989—Kimberley Diana Castleberry and Mark Anthony Saucedo were married at First Community United Church of Christ, Congregational, on the beautiful spring night of May 27, 1989. The bride and bridegroom had lived together for a year prior to their wedding, a lifestyle typical of the 1980s that would have scandalized people of the 1900s.

Rev. Dr. W. Leslie Pugh, pastor of the Dallas, Texas, church in which the bride had grown up, gone to Sunday School and Youth Group and had been baptized, officiated at the large and family-warmed event. The couple planned their own wedding and the reception that followed it at Southern Methodist University’s Alumni Center.

The bride’s father, Curtis Wales Castleberry, escorted her to the altar. A special parental blessing for the new family was affirmed by both sets of parents, Vivian and Curtis Castleberry and Anita and John Saucedo.

Forty-six children, the 14 nieces and nephews of the bride and bridegroom, and 32 children the bride had taught in the third grade at W. W. Bushman School, were included in the ceremony. Though only a few of the students actually came, the large number of children all but gave the minister and the organist apoplexy. They were certain that things would fall apart, but everything proceeded beautifully—just as Kim and Mark had planned.

For her wedding the bride wore a white satin gown with a lace-edged wide circular neckline coming to a slight stand-up collar at the back of her neck. The fitted bodice had long lace-cuffed sleeves. From the front of the tightly fitted empire waist, lace-outlined soft pleats fell in a cascade forming a full skirt at the hemline. A brief train in the back also fell from a pleat cascade. Her single strand of pearls was a gift from the bridegroom. She wore her blond hair upswept on the sides with a fringe bang over her forehead, and in the back a flower-filled French knot. Her bouquet was a shower of white roses and other white spring flowers.

The bridegroom wore a black tuxedo vested in white over a white shirt and white tie. The bride’s attendants were in emerald green taffeta gowns with snugly fitted dropped waistlines over long full skirts. The slight off-the-shoulder necklines fell to brief puffed sleeves. They carried bouquets of brilliantly colored spring flowers and wore hairclips from which fell a slight spray of white ribbons and flowers. The bridegroom’s attendants were in black tuxedos and white shirts accented with emerald-green cummerbunds and ties.

The little girls’ dresses, similar to those of the bridesmaids, were made by Chanda Robertson, and the English-styled knickers buttoned onto white shirts worn by the little boys were designed and made by Keeta Rupp. The bride’s sisters designed and made the headdresses worn by the attendants, and Keeta created the white satin lace-trimmed pillow carried by the ring bearer.

The bride’s mother prepared the reception food, enough to serve 300. She also made the bridegroom’s chocolate cake. The bride’s cake was a five-tiered white confection trimmed in multi-colored fresh flowers like those carried by the bridesmaids. Bridesmaids’ bouquets decorated the buffet tables covered with white cloths. Wine and champagne along with coffee and fresh fruit punch were served.

Mr. and Mrs. Saucedo cut their cakes, toasted their guests, and, after two hours of mingling and enjoying their wedding reception, left for their wedding night at the Mansion Hotel in a chauffeur-driven Cadillac limousine. As they pulled away, their 21-month-old nephew, Curtis, called after them, “I want to go, too!” Two days after their wedding the couple flew to Hawaii on their honeymoon and are at home in Dallas.

These two weddings, across a span of 70 years, are a clear indication of the rising expectations of generation after generation. The bride of 1919 had a typical at-home wedding, although the church in which she was reared and baptized, and where she played the organ for services, was only a couple of miles away from her home. Her granddaughter, the bride of 1989, also enjoyed a typical wedding for her time.

The bride and her sisters are sixth-generation direct descendants of William Lee and Eleanor Selina Henderson. Both sets of their maternal grandparents and one set of their great-great-grandparents rest in Bethesda Cemetery.