Compiled by genealogist Carla Richardson Stuckey, great-granddaughter-in-law of Will and Dora Henderson 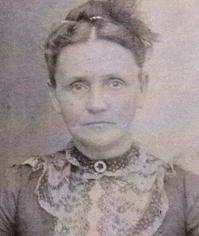 Rebecca Isadora Elizabeth Mitchell, [2] commonly called Dora, was born in Perry County, Alabama, according to research by some relatives.

Dora was married first to William B. Perkins. They had three daughters—Eva, Lovie and Willie. Mr. Perkins died and she married William Daniel Henderson. They had five children including a set of twins. One of the twins stayed on this earth only a short time. Lois Pearl was born in September of 1896 and died in May of 1897 shortly before she was nine months old.

A story about Dora was related by her granddaughter, Eugenia Henderson Stuckey. Eugenia heard it from her mother, Louise Boaz Henderson. Her grandfather, William Daniel Henderson, who was known as Will, had a reputation of being very tight with money. One day Dora asked him for some money. He said he didn’t have any. Dora knew that he hid his money above the door facing, so she took some. A few days later she noticed that her husband looked like he was pouting. She asked him why he looked so glum and he said, “Somebody got some of my money.” Dora replied, “They can’t have any of your money. You don’t have any.”

Thelma Louise Boaz Henderson, known to the family as Granny Lou, was Dora’s daughter-in-law. Granny Lou said that when she married Paul Henderson, Will and Dora’s youngest son, Dora was in poor health and died about a month after they were married.

[1]       Kerin’s Note: Author had this spelled “Basel,” but subsequent research reveals his well-documented uncle and great-grandfather had the first name “Basil,” making it the more likely spelling.

[2]       Vivian’s note: Dora Henderson’s name is Elizabeth Rebecca Isadora instead of Rebecca Isadora Elizabeth. The confusion is a result of her always being called Dora. The mix-up seems to be solved with the discovery that she gave her name on her marriage license application to William B. Perkins as “E. R. I. Mitchell.”