The text is transcribed as follows:

An article and photocopy of the sampler were printed in this quarterly journal: Southwest Oklahoma Genealogical Society, The Tree Tracers, Lawton, Oklahoma, Summer 1984, Vol. 8, No. 4, p.19.

In generations past girls first learned to sew samplers and many have been preserved. They can contain valuable biographical information and dates, as well as being an artistic family keepsake. The Smithsonian Institute has a collection of early American samplers and there are guide books on these and others found in museums across the country.

The HENDERSON/SAMPLE Family Sampler was found in 1983 by my nephew Dr. James Hensley and his wife Georgia (now living in Shawnee, OK) when they were on a genealogy search in Alabama. Mr. John Porter of Selma, Alabama shared the copy with them. The location of the sampler, if it still exists, is unknown to me. As the sampler states, it was “Wrought by Isabella E. HENDERSON [Hopewell] Female Academy Oct 18th 1836 Mrs Williamson. The earliest date is the marriage date of 1804.

John and Ann (SAMPLE) HENDERSON were my g.g.grandparents and they are buried in Hopewell Presbyterian Church Cemetery, Mecklenburg Co. NC. William L. (Lee) and Eleanor Selena (SHELBY) HENDERSON were my g.grandparents and they are buried in Lindale, Smith County, Texas. John E. HENDERSON married Abigail BRADLEY and one of their children, Margaret, married Uriah B. DOBBINS. Margaret died in childbirth. Uriah DOBBINS then married Mrs. Mary A. HENDERSON (McGAHEY), who was my grandmother.

(Source: 1850–1880 Census Records and Findagrave.com records, with the help of Ancestry.com.) 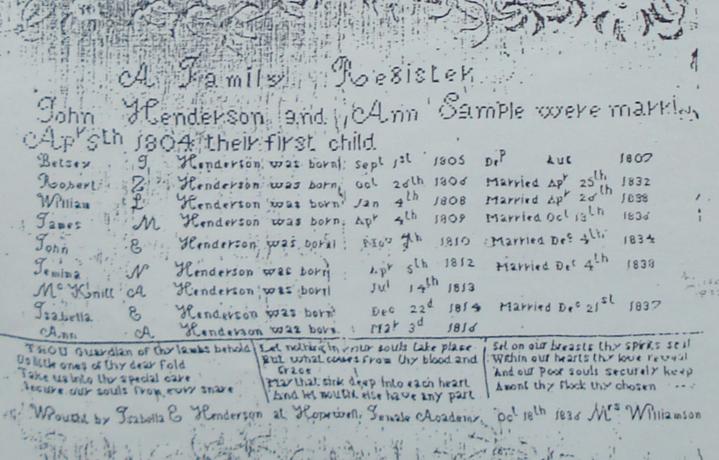 Interestingly, Vivian Anderson Castleberry descends from two of the brothers listed on the sampler: William Lee and John Elam.

Vivian’s parents, Jessie and Clarence, were from towns 40 miles apart (Lindale and Larue), and they never met or knew of each other until adulthood. According to Vivian, they realized they might have a common ancestor but didn’t know how far back. It wasn’t until a few years ago, thanks to online digital records, that we learned they were actually third cousins!

Sampler and journal article were tucked into the Henderson book, but I supplied the rest of the information.

William Lee Henderson’s sister, Isabella E. Henderson, embroidered a family sampler when she was a student at Hopewell Female Academy near Charlotte, Mecklenburg County, North Carolina. It lists their parents and siblings.

Our family only has a photocopy of a photo of this sampler. The last we knew (in the 1980s), the original was owned by direct descendants of Isabella E. Henderson in Selma, Alabama.