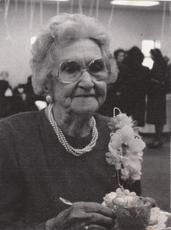 (Vivian’s Note: This was written for delivery on Memorial Day at Bethesda Presbyterian Church, Sunday, June 12, 1994, by Georgia Hensley for her husband before we learned that the program would need to be shortened. She was a master at condensing this material to one page! This is his story of his reconnection with the Hendersons.)

I am James Burl Hensley, great-great-grandson of William Lee and Eleanor Selina Henderson. However, I grew up in Oklahoma, knowing nothing of this heritage.

The search which led me to this church, this cemetery, this extended family, began in the spring of 1980, sitting on the front screened porch in Pauls Valley, Oklahoma, with my wife’s family as they gathered for the last time after her mother’s death, dividing the old family pictures and sharing again the family stories and history. I realized and remarked to Georgia that, although I had heard my own family stories, I had not retained the facts and could not go back beyond my grandmother. She encouraged me to ask questions now before death cut off the answers to those questions, as it had with her mother’s death. I went the next day to my father with pencil and paper, jotting down his memories. But his recollections had many gaps and only raised my curiosity further. I had the first sting of the genealogy bug!

In March of 1980, “Auntie Rose” Brewer, actually my father’s cousin, had died, ending some 89 years of continuous occupancy in the Dobbins family home in Wynnewood, Oklahoma. Rosa had been born, raised, married, and died in this house having inherited it from her grandmother, Mary Amanda Henderson Dobbins, who had raised her. In the basement of that house were boxes and boxes of family memorabilia, saved by the generations who had lived there. But Rosa’s only heirs were cousins who cleaned out the house and put it up for sale. From the little that survived this cleaning out was a shoe box of letters loaned to me by my father’s cousin Nolen Litchfield, executor of Rosa’s estate. These letters spanned a 70-year period and were from a variety of people mentioning other family members. Most were postmarked in a Texas town named Lindale.

Georgia and I began that evening, taking turns reading aloud as the other one’s eyes tired, and did not finish until two in the morning. Through these references to relatives and the girlhood memories of Bill Talmadge [Willie Lorilla Griggs Talmadge], another of the cousins who visited in Lindale as a young lady, I began to search that summer. After several letters and phone calls, the postmaster gave me a name to contact. I called and asked the lady who answered if she were Elvira Ferguson Ford, the sister of Prentiss Ferguson. She answered, “Yes,” and after identifying myself, I sighed, “Oh, I’ve looked all over Texas for you!” And Elvira said, “Well, honey, I’ve been here all the time.”

Elvira invited us to come to Lindale and in November of 1980, we arrived, driving by Elvira’s house where her good neighbor who knew we were expected came over and told us Elvira was in Dallas visiting her new “miracle grandchild,” Jennifer. She led us into the countryside and the Bethesda church, where we had a brief look around before dark.

On Sunday morning we returned to Bethesda Church hoping for a service at 9:30, but no one came. We drove along the country roads noticing the names on mailboxes, familiar to us from the shoebox of letters, returning to the church to wait for an 11 o’clock service. But no one came.

We were in Bethesda Cemetery looking around when a car drove in and a couple approached. We were afraid that we would be accused of trespassing and asked to leave and we began gathering up our genealogy papers. But the couple waved and smiled and asked if we were the couple from Oklahoma. Mitch and Mabel Fleming had heard our story from Elvira and were not only gracious in showing me the grave stones of my ancestors but invited us home for Sunday lunch! This was our introduction to the East Texas tradition of hospitality and good cooks.

I was full of questions, and after lunch Mabel helped me with the full names of my family—Grandma Dobbins became Mary Amanda Henderson McGahey. My great uncle Willie was William (after Mary’s brother, William Daniel) Washington (after his grandfather Washington Dobbins of Alabama.)

The afternoon passed so quickly! Mabel said, “I know someone who can really tell you a great deal of family history. I’ll give her a ring,” Just before dusk as the autumn breezes cooled in the pines around the house, Eunice McKay drove up the long driveway. We all settled in the living room and established our kinship from William Lee Henderson, from whom we were all descended.

Eunice and her two daughters, Jean Taylor and Sandra Coulter, had researched family history for many years. It was from their documentation that I learned the fascinating story of William Lee Henderson and Eleanor Selina Shelby and their move from North Carolina to Alabama and then, with their nine grown children and their families, to Texas by wagon train. And of how Mary Amanda’s first husband, who we had never heard of, was John F. McGahey. Eunice and Mabel told me how Mary Amanda had deeded four acres from her farm, along with four acres deeded by her brother, William Daniel, to establish Bethesda church, cemetery, and school, which no longer existed, and how all of them with the exception of Mary Amanda and her sister Margaret Isabelle, were buried at Bethesda.

It was from their records that I also learned that Mary Amanda was the oldest of William and Eleanor’s nine children, that she had married at 15, and that her sister Martha Elizabeth had married his brother William T. McGahey, thus their children were double first cousins. Another interesting consequence is that, as the oldest child married at 15, Mary Amanda’s own three children were born before or at the same time as her younger three brothers, John Madison, William Dan, and Franklin Henderson.

Her first husband was killed in the war in 1862 and eight years later Mary Amanda married Uriah B. Dobbins, a widower with two girls, Alfa Viola and Luxie Leatus Dobbins. Their mother, his first wife, was Margaret S. Henderson, Mary Amanda’s first cousin, the daughter of her father’s brother, John Elam Henderson. So, his two daughters and her three children, Margaret Selina, William Kelsey and James Milton McGahey, were cousins as well as stepbrothers and sisters. William Kelsey died at the age of 10 before the family moved to Texas.

Mary and Uriah had three children—William Washington, Irma Teresa,* and Essie Lorilla—bringing the household total to eight that made the move to Texas. They had a fourth child, Sally Jane, in Texas.

The hour was now late and my head was spinning as we followed the taillights of Eunice’s car over the country roads back to Tyler. I had so many names and relationships racing through my mind. But, perhaps most amazing to me was that I, who had never counted my kinship beyond my grandmother in Oklahoma had this day become a great-great-great grandson of a family stretching back through 200 years in Texas . . . to Alabama . . . to North Carolina. As I lay down that night I had a new sense of Self and of belonging.

*KERIN’S NOTE: The spelling of Teresa may have been Teressa, but I have not been able to confirm either spelling for sure. I’ve left the spelling alone in the Hensleys’ story, but I’ve spelled it Irma Teressa elsewhere for consistency.